The years following the signings of the armistice in 1918 were desperate ones for the German economy and its defeated people. There was political unrest, strikes, hyperinflation, and appalling street violence.

It was a country in which the desperately poor and obscenely wealthy lived side by side. Except for those able to afford extortionist black market prices, shortages of virtually every consumer item meant a majority of Berliners survived on ersatz everything. Men’s clothing shops offered pink and blue dickies as substitutes for shirts; cakes were made from frostbitten potatoes; while cigars with Havana labels consisted of cabbage leaves steeped in nicotine.

Within six months, it had fallen to 160,000 Marks to the dollar.  Four weeks later one dollar was worth a million Marksr.

A desperate madness seized those still in work. They raced to exchange their vast, worthless, wages for something – anything – that might conceivably be bartered for something else.

Billions of Marks would be paid for shoes that didn’t fit, unwanted clothes and trashy trinkets. Good, which, only months earlier, would have cost no more than loose change.

BLOOD IN THE GUTTERS

Then there were the almost daily street battles. Dozens were left injured or dead and blood, literally, flowed in the gutters.

Communist gangs proclaimed: ‘The red flag must wave victoriously over the whole of Germany.’ The Right wing troops, with whom they fought warned: ‘Anyone who falls into our hands first gets the rifle butt and then is finished off with a bullet.’

One right-wing youth wrote home: ‘We shot ten Red Cross nurses on sight because they were carrying pistols. We shot those little ladies with pleasure – how they cried and pleaded with us to save their lives. Nothing doing! Anyone with a gun is our enemy.’

A CITY OF  PROSTITUTES

Alongside the violence and the grinding poverty was a thriving sex trade which led to many Europeans dubbing the German capital ‘Sodom on Spree.’

By the early ‘twenties, more than 25,000 prostitutes and some 10,000 pimps, plied their trade.Many were many preteen girls and high school boys. Then as much much of it  was controlled by criminal gangs.

There were dozens of clubs, bars and cafes catering for any and every kind of sexual fantasy and desire. The majority, such as the Café Braun and the Heaven and Hell, were the venue to where men went to meet women of all ages, from sixteen to sixty.

The Adonis-Lounge and the Cabaret of the Spider were exclusively for homosexuals; the Café Domino and the Mali and Ingel served the interests of lesbians; the Free Sunland and the Territory Adolf Koch were for nudists and the Eldorado and the Monocle for transvestites. 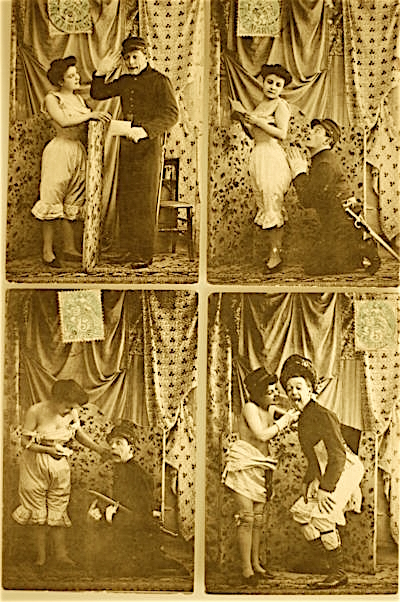 A set of saucy  postcards available in Berlin.

These were mild in comparison with the hard core pornography available.

Middle-class families were compelled to take extreme and degrading steps simply to survive.

One evening Russian writer, Ilya Ehrenburg, on a visit to Berlin, was accosted by a man offering to take him and a friend to an ‘interesting night spot’.

They were taken to a, ‘respectable flat. On the walls hung portraits of members of the family in officer’s uniform. We were given champagne – lemonade laced with spirits. The host’s two daughters appeared – naked – and began to dance’.

The parents hoped their foreign visitors would be tempted by her daughters. And would pay – in dollars, of course.

Homosexual writer Michael Davidson tells a similar story from a different sexual perspective. A wealthy gay friend told him how one morning there was a ring on his door bell. Opening it, he found a well-dressed man in a Homburg hat and carrying a briefcase standing on his mat.

‘I believe you’re a friend of a boy named —?’ the man enquired. Then added quickly and reassuringly: “It’s all right. I just like to know what sort of man my young son is having sex with.’

In her 1927 book, Ladies of the Underworld, Netley Lucas noted that: ‘Berlin found its outlet in the wildest dissipation imaginable. The German is gross in his immorality, he likes his Halb-Welt or underworld pleasures to be devoid of any Kultur or refinement. He enjoys obscenity in a form which even the Parisian would not tolerate. The young generation…spend their evenings in the many haunts of the Berlin Halb-Welt where they are able to satisfy their jaded appetites in whatever sensual debauchery or extravagance they wish for. Here are drugs, women, obscene films, cruel sports at which animals are sacrificed wilfully, and the inevitable cafés and Bierkellers where one may see any night hosts of Berliners young and old, consuming large bocks and tankards of lager beer.’

Such was the price paid by the Germans for military defeat, national humiliation and the vengeance of the victors.