In the mid ‘thirties, Europe’s largest organic herb farm was established some 16 km north-west of Munich.

For months, hundreds of labourers worked from dawn to dusk, seven days a week, preparing previously uncultivated land for planting.

First, they had to drain extensive areas of marshes by digging several mile-long trenches, cutting peat, filling in ponds and spreading a thick layer of humus over heavy moist soil. In the absence of machinery, all this backbreaking work had to be done by hand.

Within a year, acres of once waterlogged fields were green with thyme, basil, pepper, rosemary, peppermint, balm, sage, marjoram and caraway.

Additional land was set aside for growing gladioli, to produce vitamin C. There were fields of potatoes, swedes, onions, cucumbers and leeks. Greenhouses were filled with ripening tomatoes. Cattle, horses, and sheep grazed on lush pastures. Rows of beehives were producing their first honey.

There were workshops for cabinet making, glass and metalworking, clock making and basket weaving.

It was anything but.

The Herb Garden of Dachau

The garden’s name, the Plantation, was ironically appropriate. All the hundreds working there were slaves. Prisoners of the Nazis from the adjoining Dachau Concentration Camp.

From first to last light they laboured in the fields and workshops, often under the most brutal conditions, without pay and on starvation rations.

Before dawn each day Plantation workers would gulp down a mug of weak ersatz coffee and chew a small piece of coarse bread, before SS guards and Capos (block leaders who were also prisoners) marched them to their labours, urging them on their way with curses and wired oxtail whips.

For those assigned to labouring in the fields, the work was always exhausting and often no more than an excuse for sadistic bullying. Prisoners, already faint from fatigue and lack of food, were forced to carry heavy loads backwards and forwards for no real reason, transfer vast piles of sand from one field to the next or haul heavy rollers for up to nine hours a day. If they dropped dead, as they frequently did, their corpses were flung into unmarked graves and the deceased worker immediately replaced by a newly arrived prisoner. 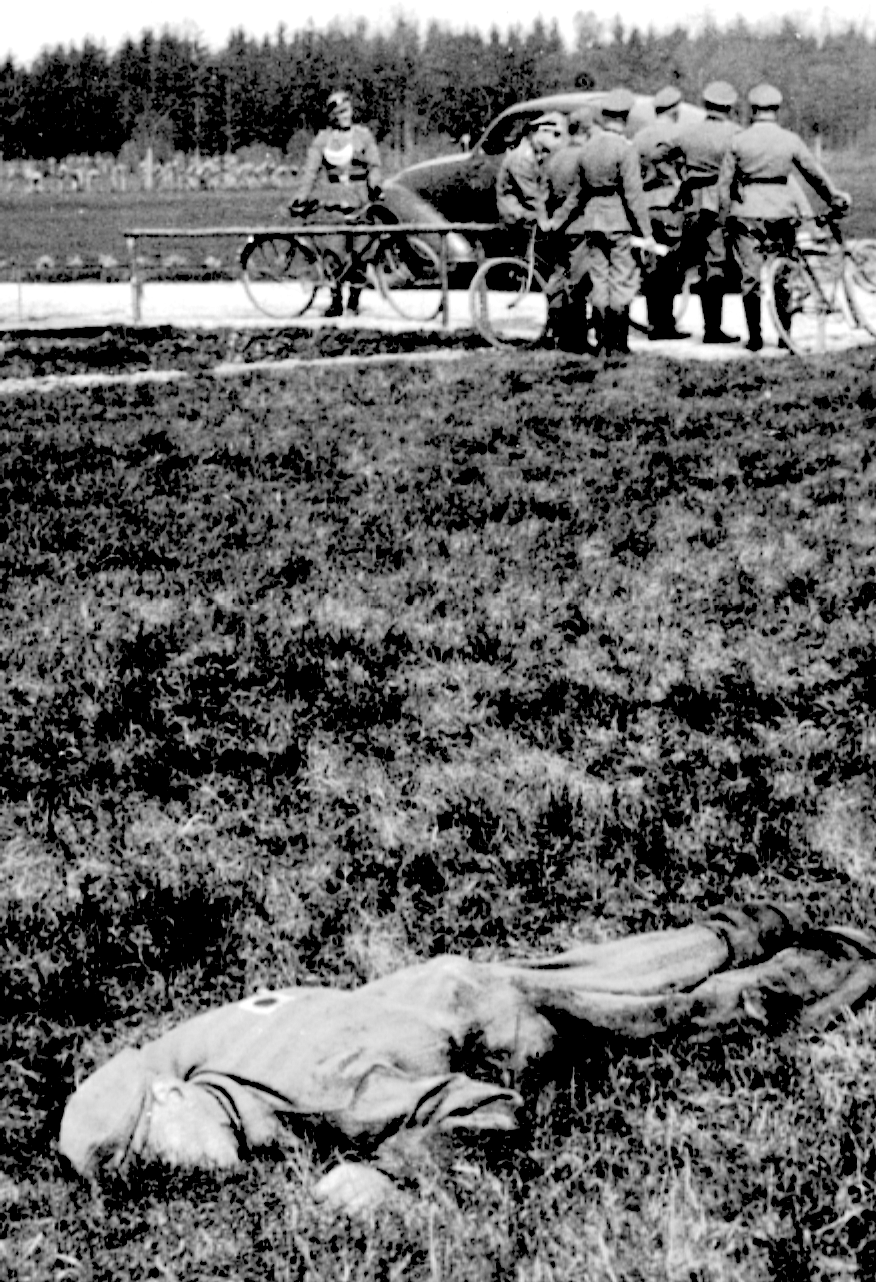 A Research Facility is Added

In the 1940’s, a research laboratory was established in the Plantation grounds, staffed by medical doctors, pharmacists, botanists, agronomists and laboratory technicians from twelve nations. They were supported by interpreters, typists, administrators, bookkeepers and salesclerks.

A six-person team of ‘botanical painters,’ was tasked with illustrating the herbs grown and a department established to translate Mediaeval herbal texts into modern German as part of the Nazi’s hunt to discover exotic new plants and potions.

Attached to the farm was a retail shop which did a bustling trade in herbs, seedlings, vegetables and other farm produce to civilian customers from the surrounding area.

All these staff, like the field workers, were prisoners from Dachau working under the constant supervision of SS guards.

The Role of the Reichsführer

The man responsible for creating both the Plantation and Dachau Concentration Camp itself was Reichsführer-SS Heinrich Luitpold Himmler.

In 1933, shortly after Hitler had become Reich Chancellor, Himmler set up Germany’s first, and largest, camp in a former munition’s factory outside the small Bavarian town of Dachau. 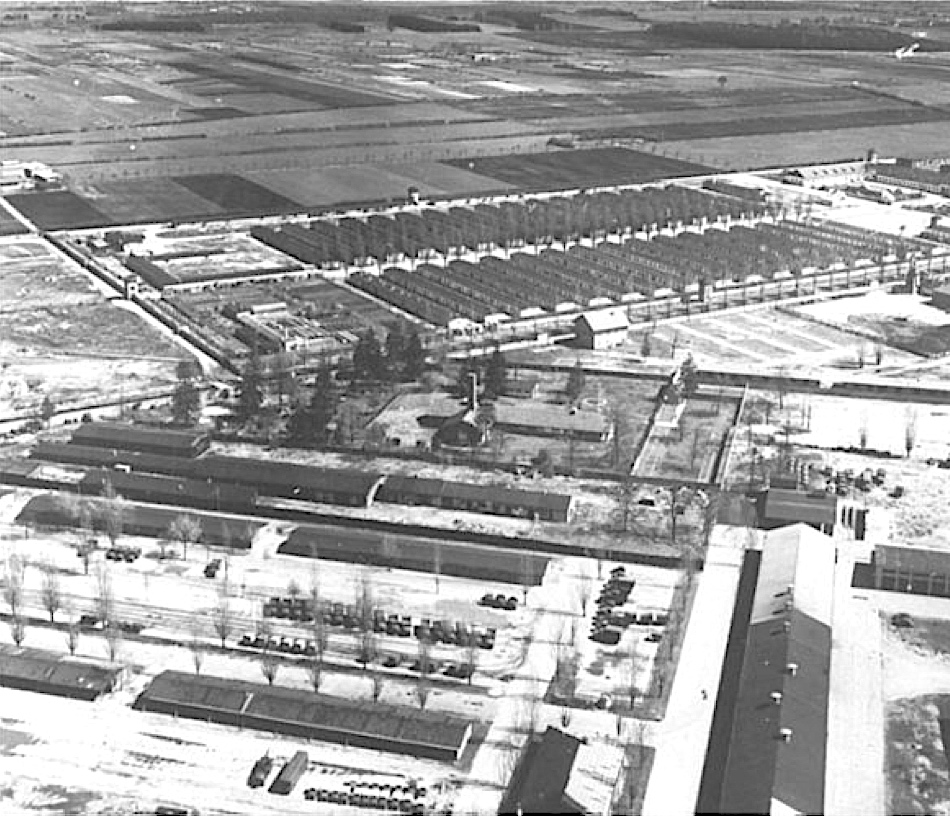 An aerial view of Dachau Concentration Camp showing the barracks where prisoners were kept, the SS guard houses with the fields of The Plantation beyond

Five years later he ordered the construction of a herb garden on the other side of a highway, the Alte Römerstrasse, to the east of the camp. 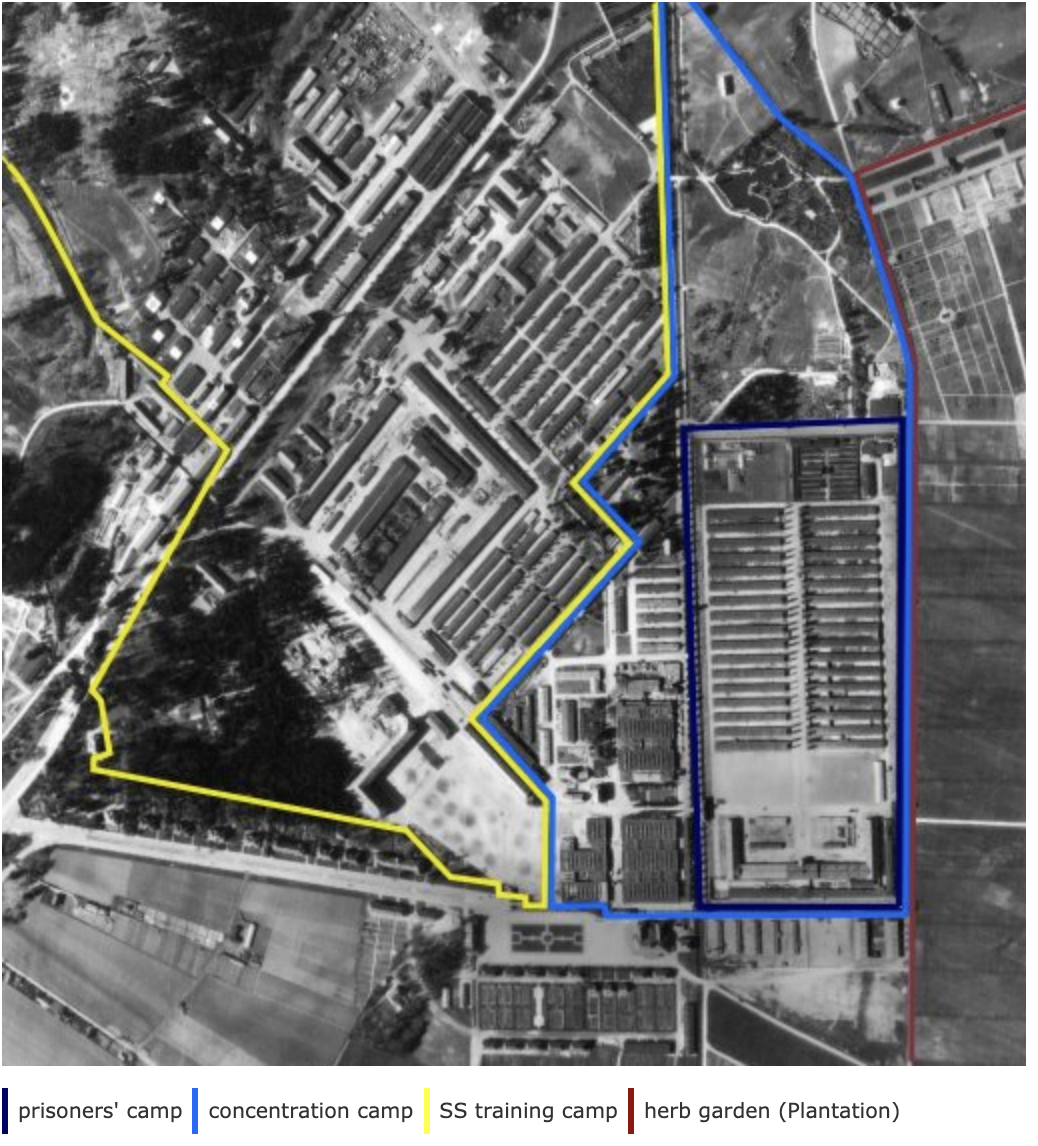 By that time Himmler had become one of the most feared men in the country notorious for his ruthless brutality and indifference to human life.

So, why was an SS leader with as much blood on his hands as Heinrich Himmler such a fervent advocate for, and believer in, organic farming and the cultivation of medicinal herbs?

The Nazi Views on Herbal Medicine

What the Nazis called ‘the new German medicine’ rejected a science-based approach to the treatment of disease in favour of hygiene and health management which they believed was the future of healthy living. This they regarded as the patriotic duty of each citizen.

The Nazis rejection of science-based medicine and the encouragement of ‘natural’ healing was essential if they were to achieve economic self-sufficiency. 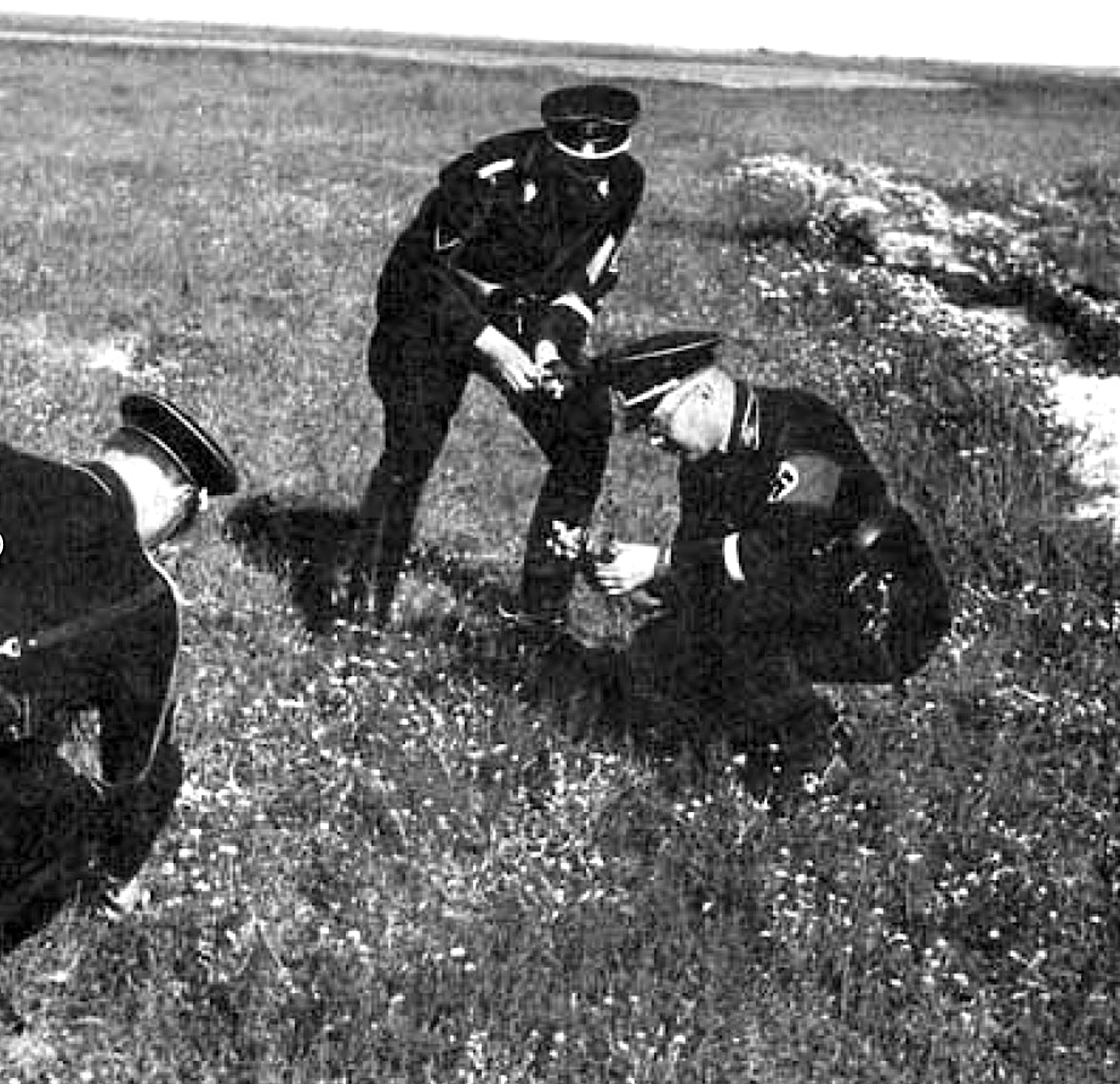 In July 1933, a group of organic farmers, under the leadership of Erhard Bartsch, a wealthy landowner, founded the Reich League for Biodynamic Agriculture.

Initial hostility quickly disappeared as an increasing number of senior Nazis began taking an interest in the League’s work.

In April 1934, Bartsch’s organic farm received a visit from Wilhelm Frick, Nazi Minister of the Interior, who expressed his strong support.  He was followed, soon after, by Deputy Führer Rudolf Hess, Head of the German Labour Front Robert Ley and Alfred Rosenberg, the influential Nazi ideologue.

Nazism and the ‘Living Soil’

In his articles and pamphlets, Erhard Bartsch rejected monoculture, synthetic fertilisers and chemical pest control. He deplored the Americanisation and mechanisation of agriculture which he viewed as threatening the German peasants’ intimate connection to ‘the living soil.

‘A love of nature’, he wrote, ‘is rooted in the German essence and the natural method of farming which awakens a genuine love for Mother Earth.’

Organic farming was, he proclaimed, the only form of agriculture capable of ‘preserving the German landscape.’

Organic Farming and the Führer Cult

From the start, most organic farmers were fervent supporters of the National Socialists and went out of their way to promote Nazi ideals and policies.

A leading article in the September, 1940, edition of Germany’s leading organic farming magazine, Demeter (it was named after the Greek goddess of harvest and family) declared that their movement’s task was to ‘awaken love for the soil and love for the homeland: This must be our goal and our lofty mission, to ﬁght together with our Führer Adolf Hitler for the liberation of our beloved German fatherland!’

In honour of his fiftieth birthday, on April 20th, they carried a cover photograph of Adolf Hitler, posed against a bucolic Alpine landscape and surrounded by small children. Inside the magazine were articles praising his role in promoting organic farming and his Party’s farsighted agriculture policies.

Later Demeter issues celebrated the annexation of Austria and the Sudetenland, the Nazi invasion of Poland, the fall of France, and every one of their military’s victories. Its writers blamed England for the war and urged the use of prisoners of war as guinea pigs in environmental experiments.

As a result of its unquestioning support for National Socialist policies, the organic movement enjoyed lavish praise from the Nazi press. This ranged from positive articles and editorials in the Party’s main newspaper, the Volkischer Beobachter, to local papers and magazines devoted to health.

The Campaign for ‘Life Reform.’

Parallel with their widespread, although far from universal, support for organic farming and the role of medicinal herbs, Nazi officials began advocating what they termed Lebensreform (life reform).

This embraced a wide range of alternative lifestyles, including vegetarianism, back to the land projects, nutritional reforms, and natural healing, all of which would, they believed, lead to a healthier, more vigorous and more virile population.

The Failure of the Dachau Plantation

Despite a huge capital investment and the deaths of hundreds of slave workers, from exhaustion, starvation, brutality, cold and disease, The Plantation was a failure.

Although the herb garden struggled on, until 1949, using civilian rather that prisoner labour posy-war, the financial losses continued to mount.

On April 22, that year, the workforce of 280 labourers and the sixty-five office staff, were all fired, the remaining stock buried or burned and the notorious Dachau Plantation closed its gates for ever.

In my next blog I will be describing Dachau’s origins, its alleged purpose and the  brutal SS regime, under which thousands of prisoners suffered and died.

Sigel (R) The Cultivation of Medicinal Herbs in the Concentration Camp The Plantation at Dachau.