In October, 1918, a hysterically blind Adolf Hitler was transported by rail to a small mental hospital, or nerve clinic, some 600 miles from the Western Front and not far from the Polish border.

In my previous blog I described how, soon after arrival, he was successfully treated by hysteria specialist Dr Edmund Forster.

Forster used hypnosis to cure him of his blindness. In my latest book, Triumph of the Will? I describe how, during this treatment, the conviction was implanted in Hitler’s mind that he had been singled out by a superior power to lead a defeated Germany to world dominance.

The transcript of the exchange between doctor and patient, which I reported, was taken from a book entitled The Eyewitness (Der Augenzeuge). 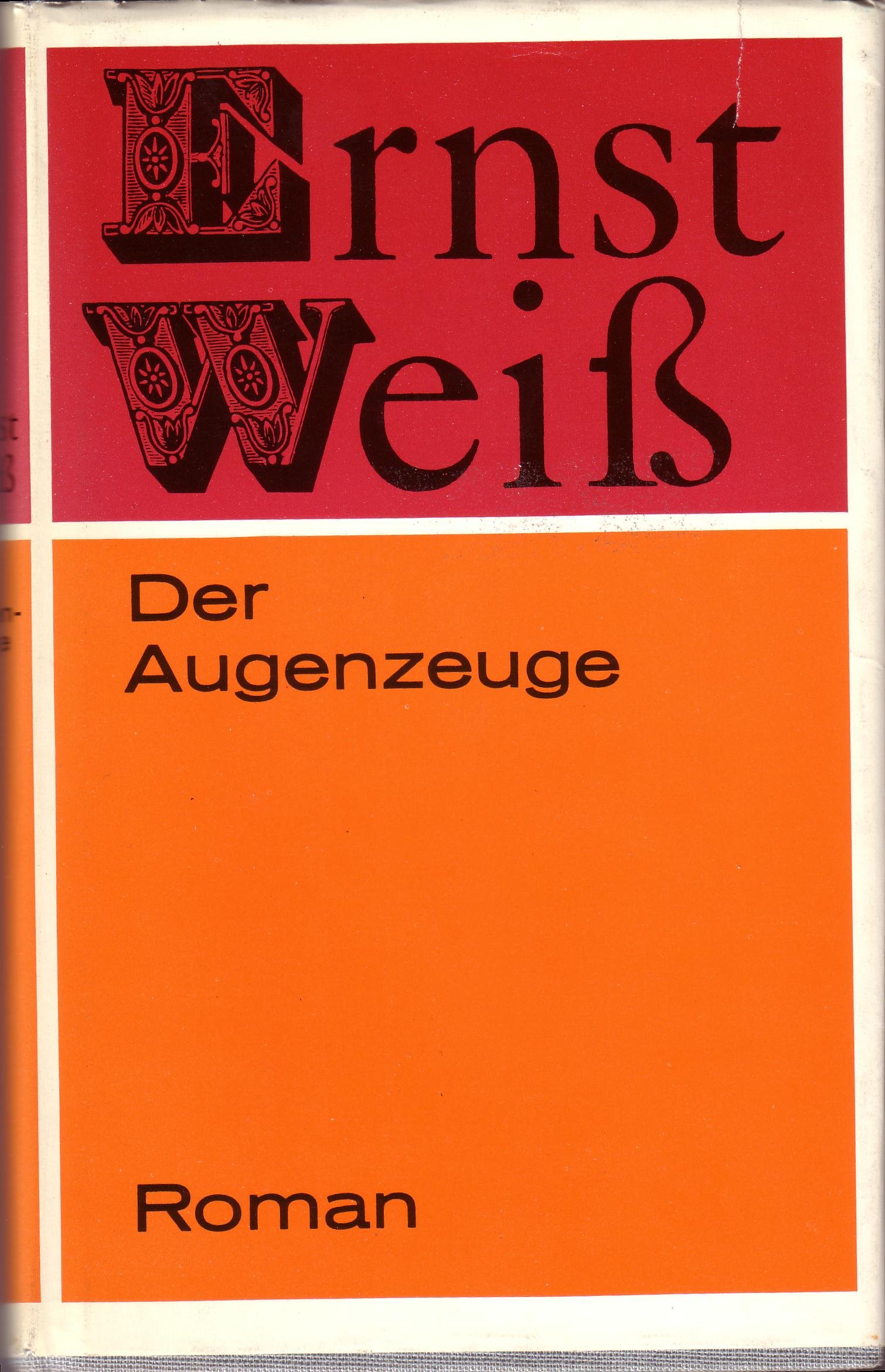 As I explained, while this book was overtly a work of fiction, there is strong evidence that it was based on Hitler’s medical file. This had been obtained by the Czech novelist Ernst Weiß, during a meeting with Dr Forster in Paris in 1933. 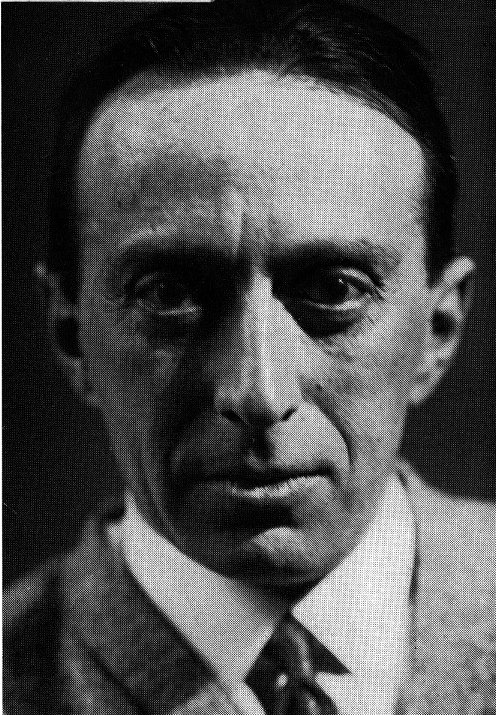 Ernst Weiß, a popular and commercially successful surgeon turned author in the twenties and early thirties. By 1938 he had fallen on hard times.

In this blog I want to explain what that evidence is and how the book came to be written in the first place.

Weiß Moves to Paris and Hires a Secretary

In the summer of 1936, following the death of his mother in Prague, Weiß moved to Paris. Although he had frequently visited the city over the years, this time he took up more permanent residence, renting a small room on the fifth floor of the Hôtel Trianon at 3 rue de Vaugirard, close to the Place de la Sorbonne on the left bank of the Seine.

A mutual friend introduced him to a young German-Jewish couple, Mona and Fred Wollheim.

Fred, a lawyer, worked at the Institut de Droit Comparé while Mona, a philologist who had studied at the Sorbonne, supplemented their income by giving private lessons in German, French and English.

A few months after their meeting, Weiß wrote to ask Mona if she would be willing to type the manuscript of a new novella.

She agreed and, as a result, Weiß and Mona started seeing far more of each other. He was in his fifties, she thirty years his junior.

Although not conventionally handsome, Mona described Weiß to me as being ‘stocky with a bony face’, the middle-aged Czech captivated the young woman with his intellect, humour and casual talk of his famous literary friends, such as Franz Kafka, Thomas Mann and Stefan Zweig.

Before long, she began writing him poetry and soon after that they became lovers. Their affair lasted until 1938, when Mona rejected Weiß’s ultimatum that she must leave her husband.

Despite their abrupt parting, they remained friends. When, later that year, he pleaded poverty and begged her to type one final manuscript free of charge, she agreed.

Had she refused, it seems unlikely that The Eyewitness would ever have seen the light of day.

By early 1938, Weiß, like many exiled Jewish writers, had fallen on hard times.

France’s policy of appeasing the Nazis meant it was all but impossible to find a publisher willing to take the risk of bringing out the work of anti-Fascist émigré writers and journalists.

Even when they did, few readers showed any interest.

‘They had left behind their readers, their publishers, the magazines and newspapers that had published their works,’ says author Klaus-Peter Hinze, ‘and thus they lost their source of income.’

Weiß’s financial situation, although precarious, would have been even more desperate but for the kindness of Thomas Mann and Stefan Zweig. They arranged for the New York-based American Guild for German Cultural Freedom to pay him a stipend of thirty dollars a month.

In the summer of 1938, Weiß read an article in the German emigrant newspaper Pariser Tageszeitung that appeared to offer an escape not only from his increasingly dire existence in Paris but from France itself.

The Guild, he read, was offering a literary award for the best German novel by an exiled writer. American publishers, Little, Brown and Co. was giving the award as an advance payment for the American edition of the prizewinning novel.

The judges were to include his friends, Thomas Mann, Rudolf Olden and Bruno Frank. Entries had to be written under a pseudonym and the competition was only open to works of fiction.

Not only would winning the award solve Weiß’s financial problems, at least temporarily, it would also make it more likely that the Americans would give him a Visa to enter the United States.

His influential friends in New York and Washington were already making representations on his behalf to the State Department.

Despite the October 1st deadline being less than a couple of months away, Weiß decided to submit an entry under the pseudonym of Gottfried von Kaiser.

While searching for a plot, he recalled his meeting, five years earlier, with Edmund Forster and decided to use Hitler’s medical notes as the basis for his story. 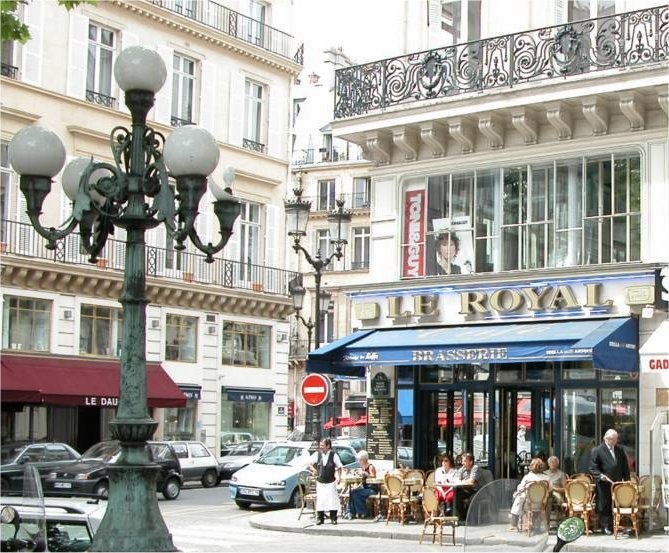 The Paris cafe where Edmund Forster met the emigre writers and handed over Hitler’s medical notes. 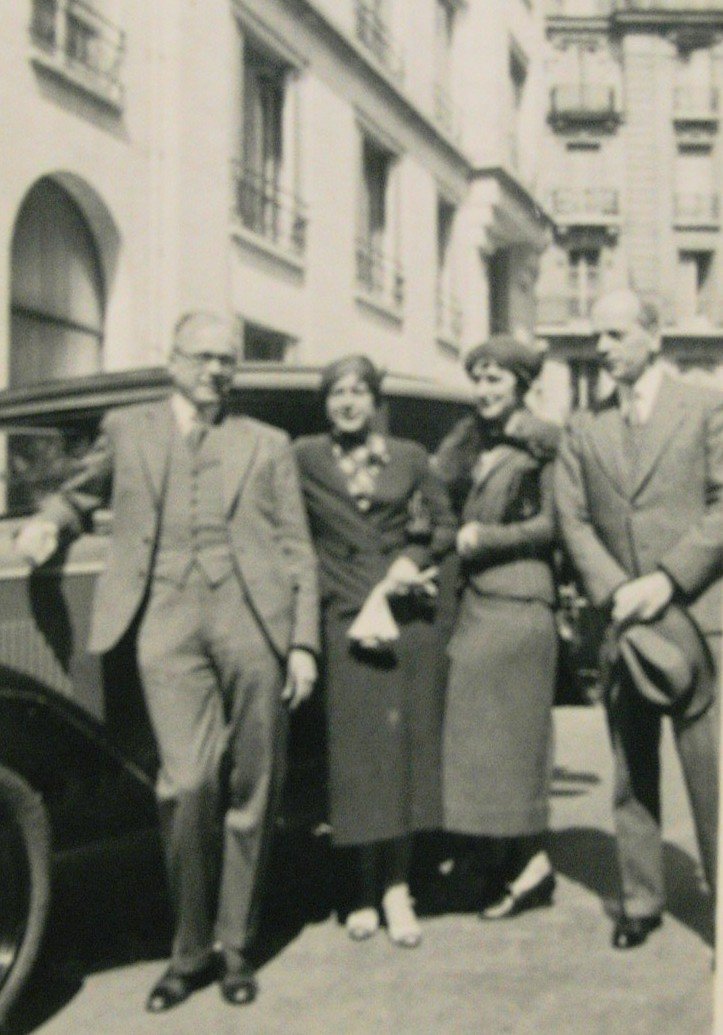 Edmund and Dirk Forster with their wives in Paris, in 1933

As stipulated in the terms of the competition, he would present the factual details of Hitler’s treatment, as a work of fiction 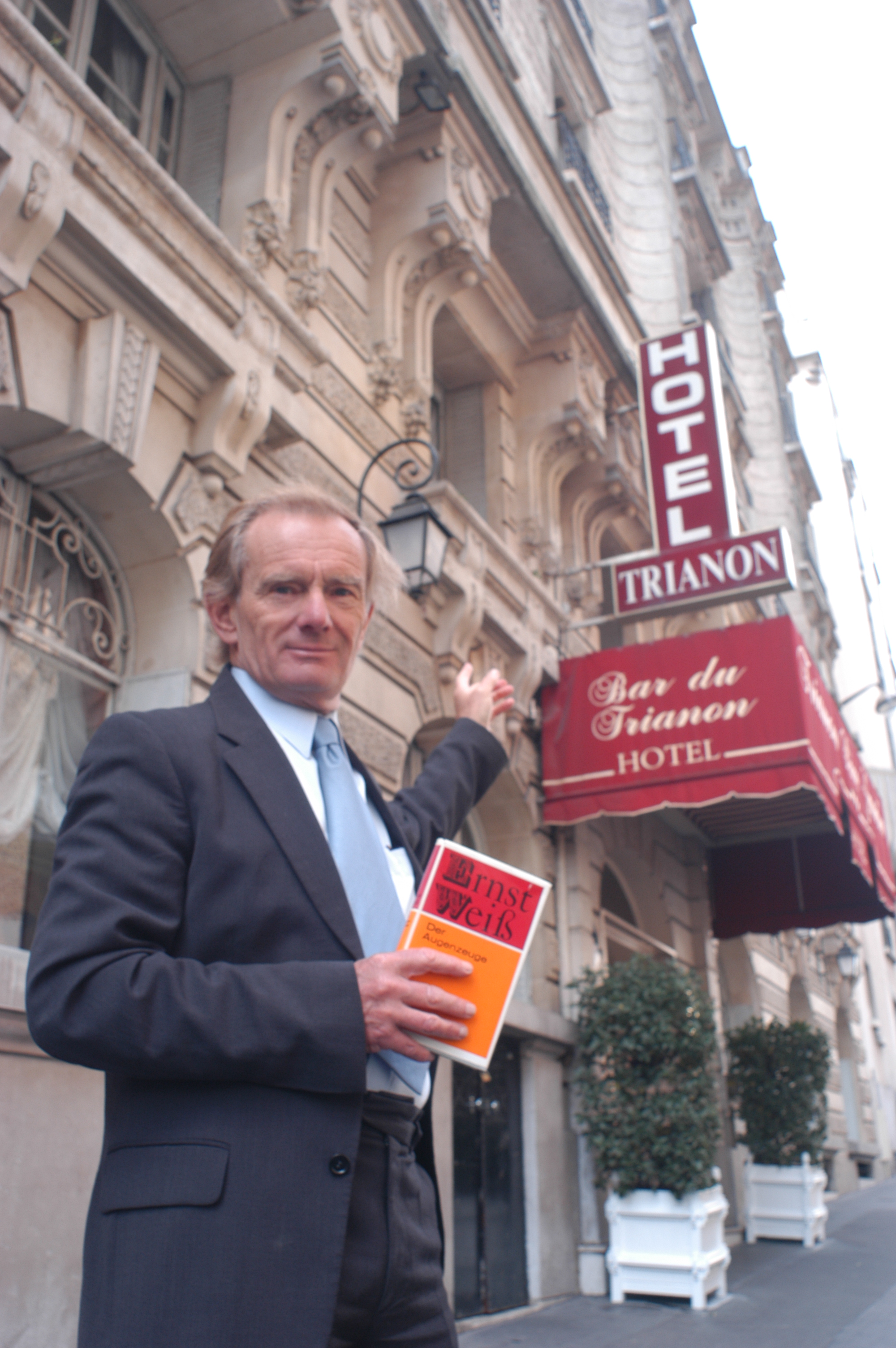 The author, with a copy of The Eyewitness, outside the Hôtel Trianon, where Weiß lived and worked in a small room on the fifth floor.

For the next few weeks he barely slept or ate while racing to complete the manuscript.

With only a couple of weeks to spare, he delivered his handwritten novel to Mona who typed the clean copy. She then parcelled up the Der Augenzeuge and mailed it to New York. Once there it was added to the 239 other entries from hopeful authors.

The prize went, instead, to thirty-six-year-old Arnold Siegfried Bender, who wrote under the pseudonym Mark Philippi.

By sending his manuscript out of France, however, Weiß saved it from certain destruction at the hands of vengeful Nazis.

In late June, 1940, German troops raided Mona’s apartment and carted away all the novelist’s books and papers.

‘Among the documents taken away were Weiß’ diaries,’ she told me, decades later, in New York.

Mona managed to escape from France and begin a new life in the United States.

Her husband Fred was less fortunate. Arrested by the French police, who collaborated closely with the Nazis, he perished in a French internment camp.

The Fate of The Eyewitness

In 1963, a young publisher, named Hermann Kreisselmeier, agreed to its publication. But he insisted that the book should be judged purely as a literary work, with no reference being made to its likely factual basis.

It was a decision that doomed any chances of commercial success. Of five thousand copies printed in 1964, less than half had been sold a decade later.

Fiction or Fact Disguised as Fiction? You Decide

Consider these seven points and then make up your own mind. 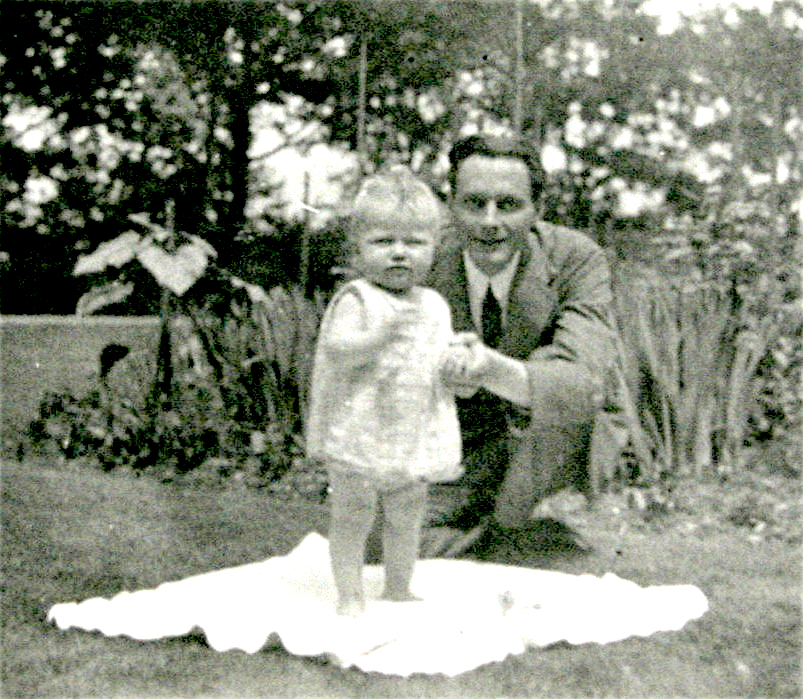 Weiß playing with Maria, the daughter of Dirk Forster, Edmund’s brother, pictured in the garden of the diplomat’s Paris home in 1931

5. The noted American historian, Rudolf Binion, was convinced that his novel perfectly describes both the character of Dr Edmund Foster and the manner in which he would treat a patient like Hitler.

6. Finally, we have the strong Nazi interest in Weiß’ work and the fact that they meticulously gathered up everything by or about him that Mona had in her files.

The Death of Weiß

On the evening Friday, June 14, 1940, the day the first German troops marched into Paris, Weiß locked himself in a bathroom at the Hôtel Trianon. Alone, abandoned and despairing of ever receiving his US Visa, the doctor turned novelist slashed at his wrists with a cutthroat razor. In his misery, this one skilled surgeon made a mess of the job. He bled slowly and painfully to death on the bathroom floor.

A Visa Was Waiting

The irony of the situation was that, unbeknown to him, his powerful friends in New York had managed to secure an exit visa for him. This was awaiting his connection at the US embassy in Paris. All they had to do was collected and leave for the safety of neutral America. No one had bothered to tell him.

In my next blog…

I will explain how Gestapo chief Heinrich Hitler, one of the most feared men in Germany, was also an enthusiastic organic farmer and operator of Europe’s largest and most successful herb gardens. These were based in Dachau concentration camp and tended,under brutal conditions, by its half-starved inmates.