WAS HITLER A MASTER HYPNOTIST? By DAN JONES

WAS HITLER A MASTER HYPNOTIST? By DAN JONES

In his 1943 book, Hypnotism, psychologist Professor George Hoben Estabrooks described Hitler as ‘the world’s best hypnotist.’ He went on to describe the five components of his approach: 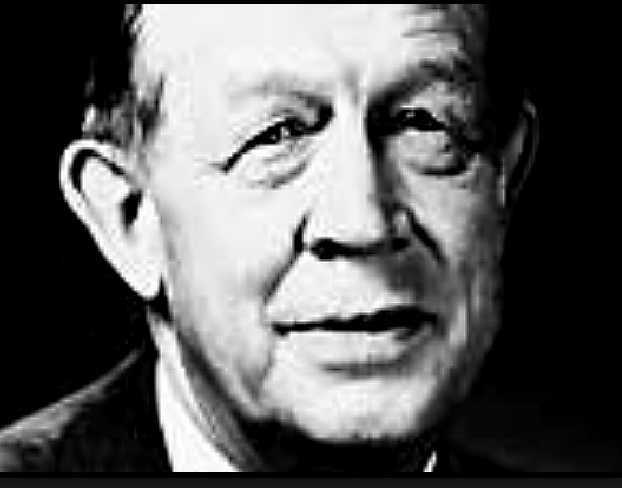 A friend informs your neighbour is a paedophile. They offer no evidence for their accusations and you dismiss it as malicious gossip,

A few nights later a mob gathers around the man’s home. You learn he had been visited by the police but took no action had been taken. Angered and fearful, group of local residents have decided to take the law into their own hands.

Consumed by their ‘righteous’ action in protecting the community, they are shouting, screaming and brandishing weapons. You feel you should intervene but are too scared to do so.

You are also confused. Your mind is occupied by concerns about protecting your own children. The more fearful you become the harder you find it to think logically and objectively.

Someone comes out of the house to confront the crowd. They attack. A stranger thrusts a club into your hand as the mob charges. Swept up in the experience, you joining in as they beat the man.

Afterwards you are appalled by your actions which were so out of character.

How could this have happened, you ask yourself?

The answer is you fell victim to the hypnotic power of emotional contagion.

RESTRICTION OF THE FIELD OF CONSCIOUSNESS

In that thought experiment, you were invited to experience a restricted field of consciousness. Powerful emotions make it more likely you will go along with the thoughts, beliefs and actions of those around you. ‘The roaring of the mob, or the wild exhortations of the leader are effective in blotting out every other stimulus.’ says Estabrooks. ‘This leads to an ‘avalanching’ of emotional fury…The more suggestible, the more emotional; the more emotional, the more suggestible.’

SOCIAL SANCTIONS, OMNIPOTENCE AND THE REMOVAL OF INHIBITIONS

As part of the group, certain behaviours are treated as acceptable and expected. It is very difficult to fight our instinctive drive to conform and fit in. Because of this we can all too easily find ourselves acting without conscious thought or reflection. Being part of a crowd of like minded people, offers a ‘group sanction’ leaving each individual with feelings of omnipotence.

THE POWER OF MOB MENTALITY

In the thought experiment, I illustrated how someone can take part in the violent mob despite initially being against it and wanting to stop what they were doing.

All the leader of the mob has to do is initiate the hypnosis and keep it on course. Once this is done they have no need to try and influenced. Every member of the crowd becomes a hypnotist for every other member.

HITLER AS A MASTER HYPNOTIST

Hitler’s created emotional contagion, initially by evoking fear and then anger. Anyone who stepped out of line was swiftly and brutally punished. ‘It would be a brave man indeed in Germany…who dared raise his voice against the leader,’ Estabrooks commented. ‘Death is a sudden thing and tends to be forgotten but the living death of a political prisoner is a constant reminder to all that discretion is preferable to courage.’

Fear and anger are also a useful foundation on which to build hatred for ‘the other’. Add to that hatred, patriotism and myths of Nordic superiority and you give the mob a powerful story in which to believe and to feel part of.

By controlling the press and radio, the Nazis were not only able to generate emotional contagion, they were also able to restrict the field of consciousness of millions, and focus their minds on the dominant theme of National superiority.

They also created social sanction by promoting the notion that: `Aryans are being persecuted by all other groups but it is their God-given duty to…rule the world.’

This gave individuals a feeling of omnipotence to take group action. Each individual acting with full approval of their group and feeling that only the groups approval is worthy of consideration.

By doing so, each individual was released from their inhibitions and felt were encouraged to carryout actions they would never ordinarily do.

HITLER AS A STAGE HYPNOTIST 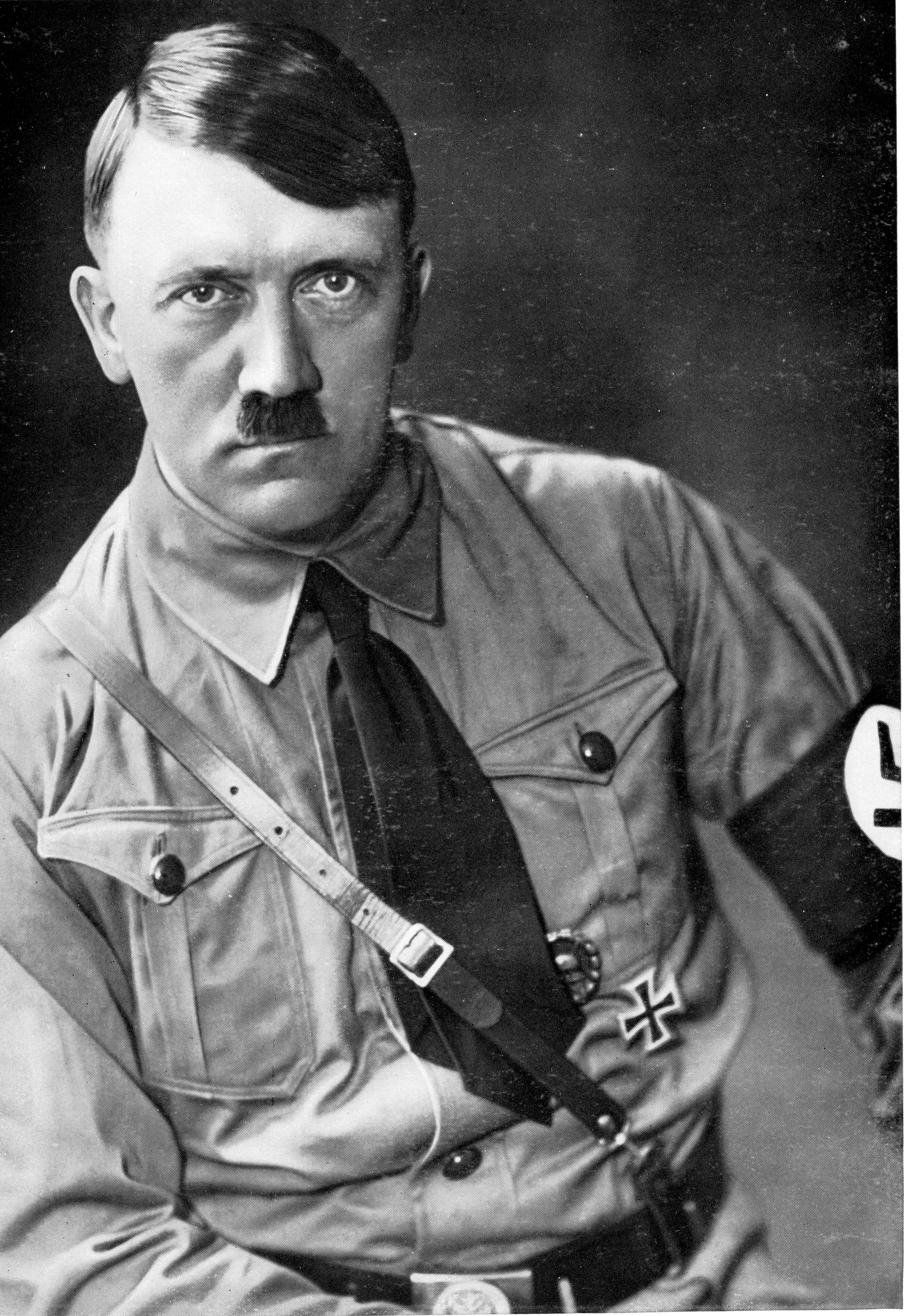 Clinical and research hypnotists typically work in a quiet environment and use relaxation as part of their induction.

Stage hypnotists, on the other hand, use shock, surprise and confusion. They are showmen who may have loud environments, bright lights, lavish or grand sets to create a mood or image, posters and marketing material and claims which build up expectation and often in an audience people have excitement, but also anxiety at what is going to happen and whether they will be hypnotised.

Estabrooks described how Hitler staged his meetings at night in the open: ‘He himself is in the glare of lights, above his audience, forcing the listeners to look up and at a bright object.’

By placing himself higher than the audience not only was he able to exert greater control over them he could also to control the lighting, settings, his use of voice and gestures and precisely how his image would be portrayed to the public. He had a special microphone developed to add strength, power and resonance to his voice.

All these factor were then, as they often are in the performance of populist political leaders today, sufficient to overwhelm rational thoughts with a flood of hypnotically induced emotions. 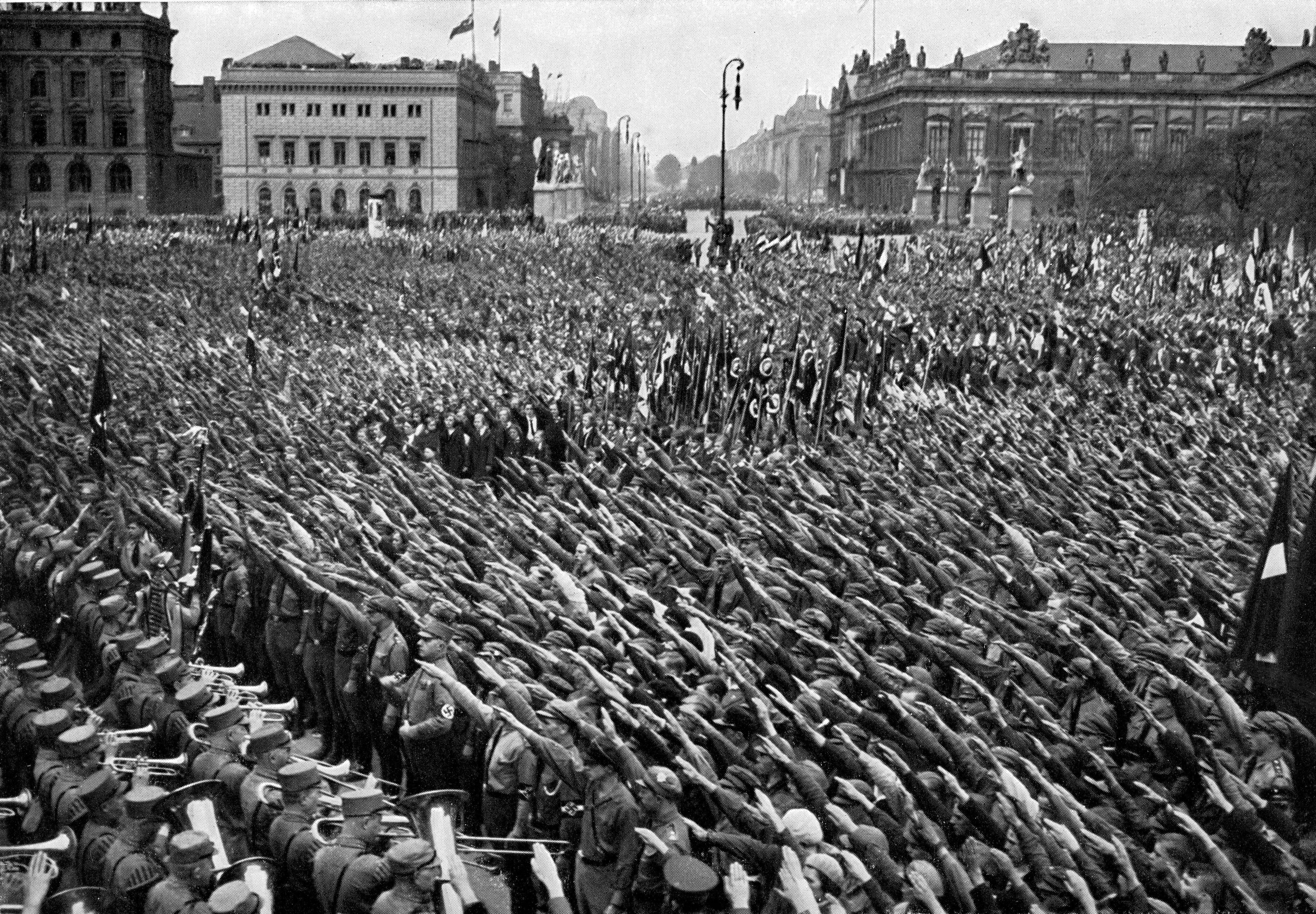 To learn more about the theory and practice of hypnosis go to www.themindchangers.co.uk

Open to Suggestion: The Uses & Abuses of Hypnosis by Robert Temple, 1989, The Aquarian Press