NÜRNBERG AND THE PSYCHOLOGY OF PLACE

NÜRNBERG AND THE PSYCHOLOGY OF PLACE

In July, 1961, a year after the trial of Adolf Eichmann in Jerusalem, Yale psychologist Stanley Milgram conducted one of psychology’s most famous, and controversial, experiments.  You may well have heard of it, if not here is a summary of what was involved.

Interested in investigating whether Germans were particularly obedient to authority figures, a common explanation for the Nazi genocide at that time, Milgram advertised for participants willing to take part in a study of learning at the University. Each would be paid $4 50 for turning up.

When they arrived, each participant was paired with another person and lots were drawn to see who would be the ‘learner’ and who the ‘teacher’.

In fact, the draw was fixed to ensure the participant was always the ‘teacher’. The ‘learner’ was, in fact, an actor confederate of the psychologist, called Mr Wallace.

Punished for his Mistakes

Mr Wallace was taken into a room where electrodes were attached to his arms. The ‘teacher’ was instructed to administer electric shocks to the ‘learner’, via the electrodes, every time he made a mistake. With each mistake error, the current had to be increased up to a potentially lethal maximum of 450 V. 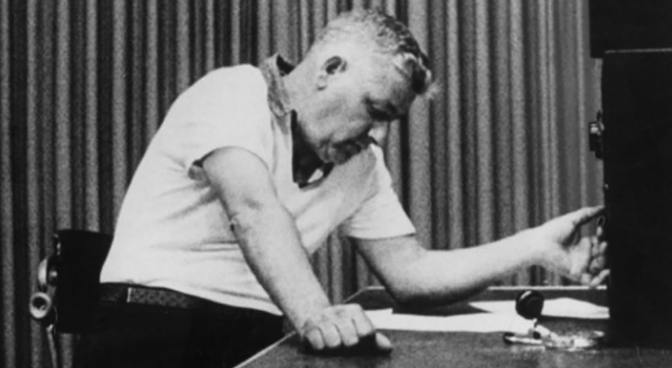 A participant in the Milgram studies punishes Mr Wallace

As the ‘punishment,’ apparently, became increasingly painful, the distress of the ‘learner’ appeared to become ever more intense. He became vocal in his cries of pain and pleas for them to stop.

Despite his apparent anguish, the majority of participants continued to inflict, what they believed to be genuine pain.

A Failure to Replicate

Not surprisingly, this study has been hugely criticised on both ethical and technical grounds.

What is most interesting, to a psychohistorian like myself, is the fact that when attempts were made to replicated the study, not in the prestigious surroundings of Yale University’s psychology department, but in a shabby office block in the poorest part of town, far fewer participants were prepared to obey the experimenter.

From this it would seem that the context in which an order is given context plays an important role in the extent to which it will be unquestioningly carried out.

Nürnberg and the Nazis

With this in mind, let’s travel back in time to 1933 when the medieval German city of Nürnberg became the location for the first of the Nazi Party Rallies. 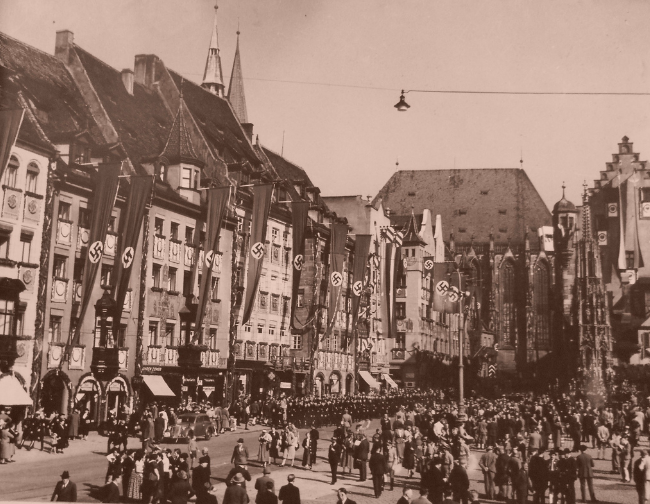 The 11th-century city bedecked in all its Nazi finery’.

Nürnberg first attracted the attention Julius Streicher, a secondary school teacher and anti-Semitic Nazi rabble-rouser, when he was searching for a suitable venue for their rallies.

The city’s location, at the junction of seven main railway lines, made it easy for party members to travel there from all over Germany. Furthermore, because the old centre was relatively compact, even the fledgling Nazi Party’s modest membership could make an impressive show of strength as Storm Troopers paraded along the narrow streets and massed in the ornate squares.

Practicalities aside, the 11th-century city, with its steeply pitched roofs, narrow, winding cobbled streets and ancient bridges also provided the perfect backdrop against which to act out the Nazis’ pseudo-mythological and romantic ‘volkish’ fantasies. It was in Nürnberg that the 19th-century poet Ludwig Tieck re-discovered German art and culture, and here, too, where the cobbler-poet Hans Sachs sang, in Wagner’s Die Meistersinger,  one of Hitler’s favourite operas, of the violence lurking in the heart of all men.

Captivated by its history and architectural delights, Hitler and the Party set about transforming Nürnberg into a citadel of National Socialist culture.

On the south-east outskirts, they constructed a complex series of buildings and open-air arenas to provide dramatic backdrops for their annual rallies. 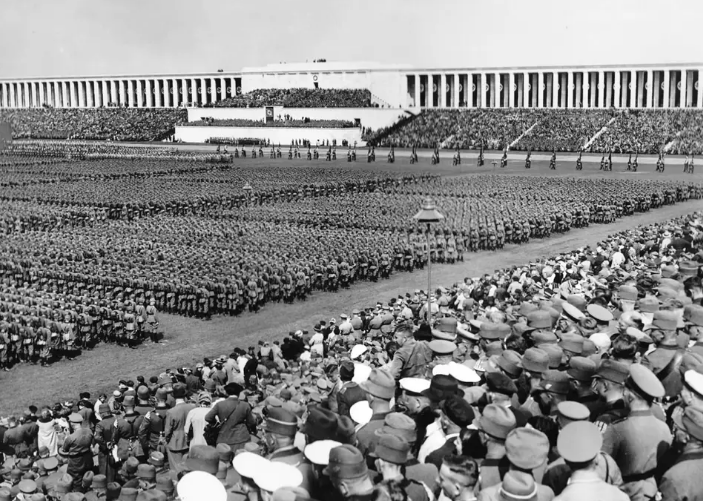 These included three gigantic parade-grounds, each capable of holding around half a million people; the Märzfeld (one of a number of arenas in which military manoeuvres were held under public gaze) and the Grosse Strasse, a mile-long, hundred-yard wide paved area along which massive formations of troops and armoured vehicles could parade.

They were, in the words of author Alan Wykes, ‘gigantic melodramas glorifying the implacable monster of Nazism.’ Ones in which ‘no cheap theatricality was omitted nor expense…In a blaze of searchlights, framed by towering banners, fireworks and mock battle, thunderous martial music and mesmeric chanting drown rationality – but not the Führer’s screeching, hate filled tirade.’ 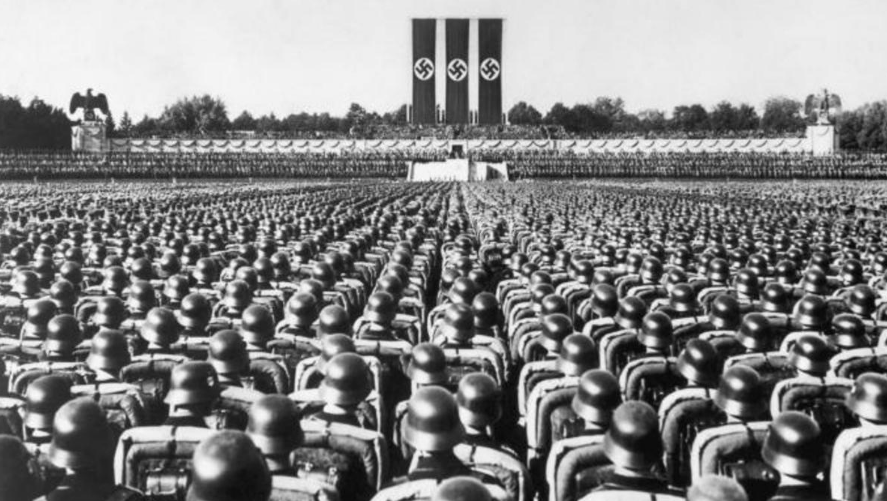 In preparation for their rallies, the Nazis erected a vast, tented city, capable of accommodating two hundred thousand visitors from all over Germany, on the city’s outskirts.

All aspects were meticulously planned with rules and procedures in place for everything from dealing with thunderbolts to unblocking latrines.

Every rally included the same key elements, each designed to mesmerise those present.

There was a ‘Cathedral of Light,’ created using 130 anti-aircraft searchlights placed 12 metres apart and pointing skywards. These surrounded spectators with vertical columns of white light.

Every major public building, and a majority of private homes, were festooned with huge Nazi flags, swastika banners and other insignia of National Socialism.

Against the backdrop of the Nürnberg stadium, its podium dominated by a gigantic swastika-bearing eagle, spectacles involving hundreds of thousands of the Nazi faithful reached their climax with the solemn ‘consecration of the colours’.

To a rendering of the Nazi hymn, the Horst Wessel marching song, new S.A. and S.S. banners and standards were carried forward to be reverently touched against the Blutfahne (Blood Banner). This was a tattered flag the Nazis claimed had been soaked with the blood of those slain in Hitler’s abortive Munich Putsch of 1923.

The stage-managed rally messages were meticulously designed to create a mood of hysterical adoration among Hitler’s followers.

As the American journalist William Shirer noted in his Berlin Diary, ‘Like a Roman emperor Hitler rode into this medieval town…past solid phalanxes of wildly cheering Nazis who packed the narrow streets…Tens of thousands of Swastika flags blot out the Gothic beauties of the place, the facades of the old house, the gabled roofs. The streets, hardly wider than alleys, are a sea of brown and black uniforms…a mob of ten thousand hysterics who jammed the moat in front of Hitler’s hotel shouting: ‘We want our Führer’ …They looked up at him as if he were a Messiah, their faces transformed into something positively inhuman.’

At the heart of the spectacle was Adolf Hitler, with his intense blue eyes and brisk, aggressive gestures, working his magic on the masses and, through the use of repetitive rhythms of speech, generating in them an almost hypnotic state so they came away with ‘shining faces and dreamy eyes.’

‘No one in history has understood the basic principles of mass persuasion better than Hitler, and no organisation expended more labour and material in perfecting and using its techniques than did the Nazi Party during its turbulent and vicious life,’ comments author Barrie Pitt. ‘Every art, every subterfuge and contrivance were employed to hammer into the spectators and participants the message that Nazism was the only religion and Hitler its God.’

Although now over eighty years old, the techniques of effective persuasion, through the creation of uniquely special environments, remains as powerful, and as effective as ever.

The next time a politician you know holds a rally, count up how many of these well-established Nazi techniques he or she uses to try and infiltrate their political message into your mind while bypassing your brain.

Just because it is old historically doesn’t mean it is psychologically outdated.

A final warning from the past. For its six year long association with the Nazis, medieval Nürnberg was ‘punished’ severely by the Allies through endless bombing raids. Raids which all but obliterated the ancient buildings and wiped the city from the face of the earth. 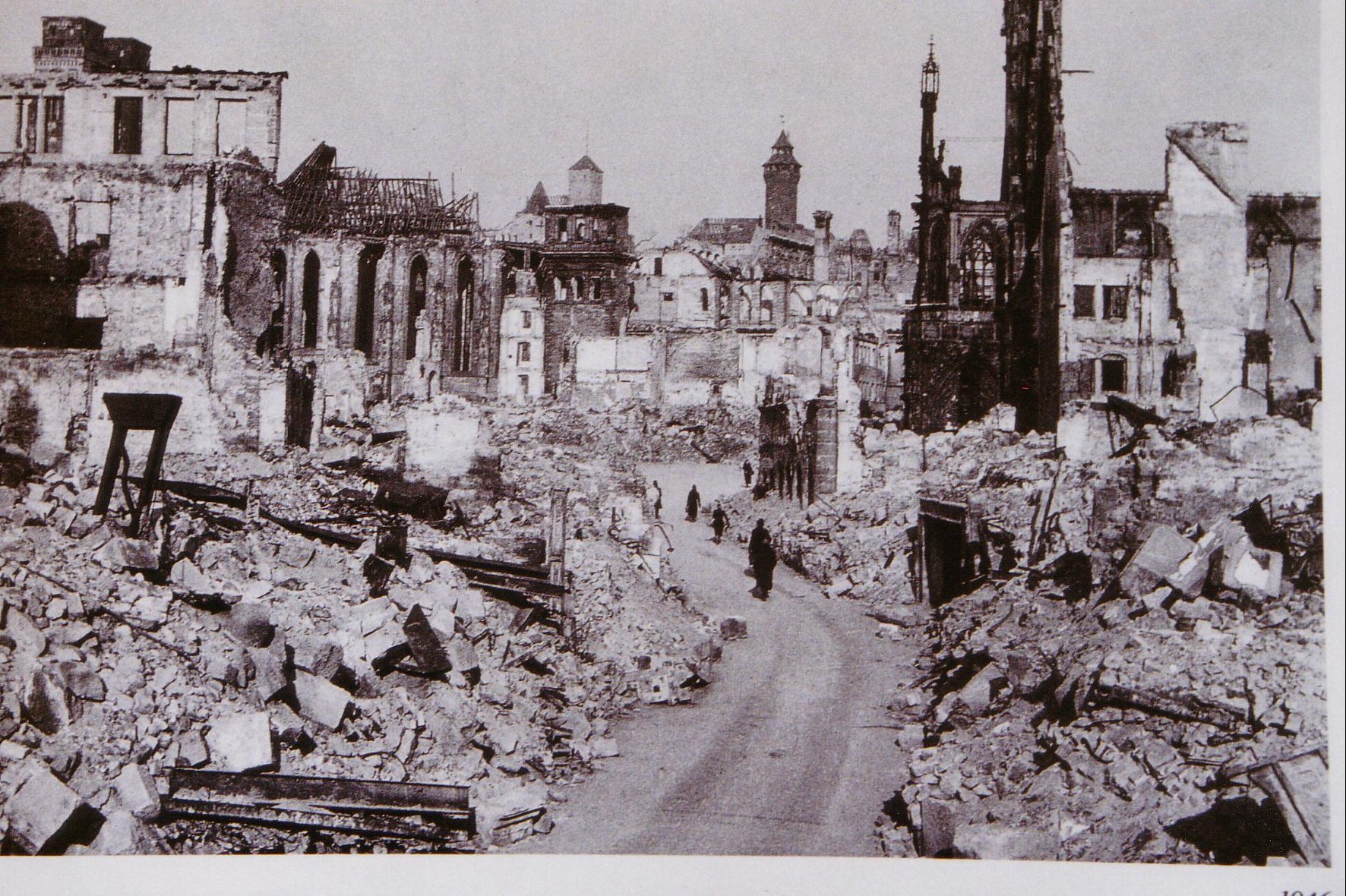