CHRISTMAS ON SPREE IN THE WEIMAR REPUBLIC

CHRISTMAS ON SPREE IN THE WEIMAR REPUBLIC

On Christmas day, in 1920s Berlin, most people enjoyed the bleak festivities on ersatz everything.

Men wore pink and blue dickies as substitutes for shirts.  Christmas cakes were made from frostbitten potatoes. Cigars may have sported Havana labels but they were made from cabbage leaves steeped in nicotine.

Only those able to afford extortionate black-market prices could enjoy a traditional meal at home or dine in a fancy restaurant.

Broken by the Allies

Under the terms of the 1921 Reparation Act, British and French politicians demanded that Germany pay, over 42-years, six billion marks in raw materials and industrial products.

The result was economic catastrophe. In January of that year a dollar was worth 7 marks.

Six months later one dollar was worth 4.2 billion marks! 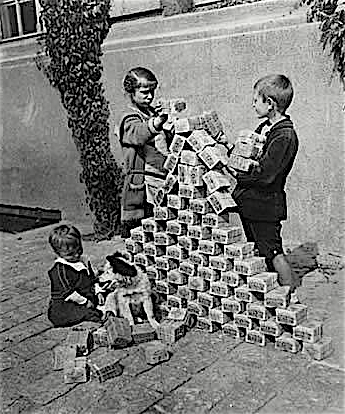 Bundles of Marks became playthings for children in 1920’s Germany

Pensioners and anyone on fixed incomes became destitute, those in work were seized by a desperate madness as they raced to exchange their vast, worthless, wages for anything that might be bartered for something else.

That Christmas, millions of marks were paid for shoes that didn’t fit, second-hand clothes and trashy trinkets which, only months earlier, would have cost no more than loose change.

After giving a concert, the pianist Artur Schnabel had to ask a fellow musician to help him carry his fee home.

Passing a delicatessen, he lightened their load by using half his earnings to purchase two sausages. By the following morning, he was unable to buy a single sausage with the other half. 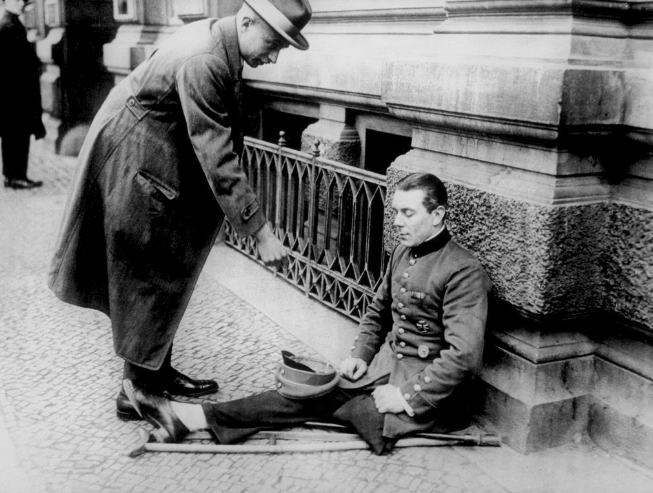 A war veteran begs on the streets of Berlin

A visitor shown around the children’s ward of a Berlin hospital was told by the doctor: ‘You think this is a kindergarten for the little ones. No, these are children of seven and eight years. Tiny faces, with large dull eyes, overshadowed by huge, puffed, rickety foreheads, their small arms just skin and bones, and above the crooked legs with their dislocated joints the swollen, pointed stomachs of the hunger oedema…this child consumed an incredible amount of bread, and yet he did not get any stronger. I found out that he hid all the bread he received under his straw mattress. The fear of hunger was so deeply rooted in the child that he collected the stores instead of eating the food: a misguided animal instinct made the dread of hunger worse than the actual pangs.’

From my book Triumph of the Will?