In the early 1930’s Jewish entrepreneur Wolf Lévitan opened the Lévitan, an elegantly designed department store, as Paris’s first ever IKEA. Over four floors, and in a capacious basement, it sold reasonably priced household furnishings to customers from all parts of France.

Bright blue and gold mosaic tiles, above the building’s arched entrances on the Boulevard Magenta, proclaimed its purpose was to serve the ‘Classes laborieuses’ (The working classes). 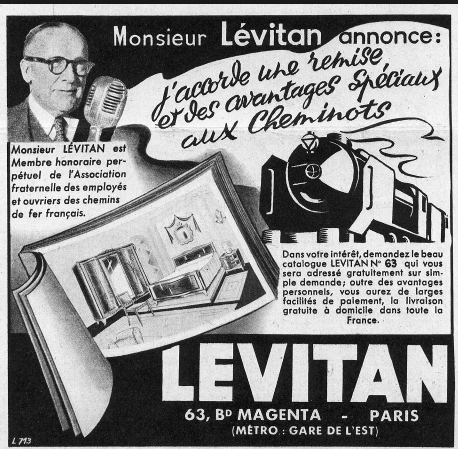 The Nazis March Into Paris

Shortly after 7 am, on June 14th 1940, the first German army motorcyclists roared into Paris. Behind them came cameramen and broadcasters in preparation for  the arrival of Hitler’s victorious troops.

The four-year-long German occupation of the ancient city had begun. 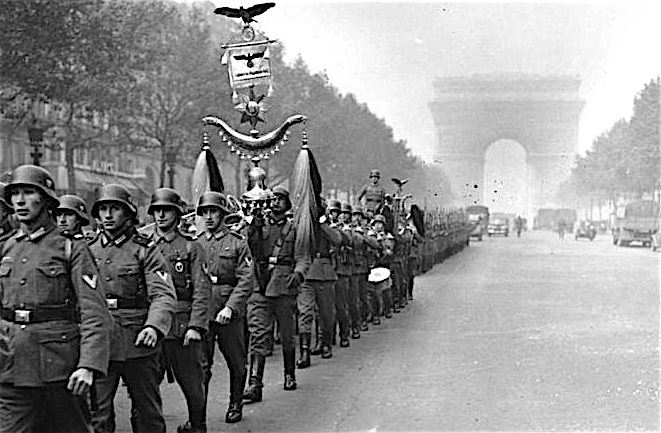 In October, the same year, the Nazis passed a law confiscating all Jewish owned property, including the Lévitan. The wholesale theft of household possessions started not long afterwards.

These days the ‘lootocracy,’ that best describes the Nazi Reich, is typically associated with the stealing of priceless art works from vastly wealthy Jews, such as the Rothschilds. Plundering frequently carried out on direct orders from Herman Goring.

Far less well known, is the theft of the millions of mundane household items from working and middle class Jewish families. The code name for this wholesale theft  was Aktion Möbel (Furniture Action). 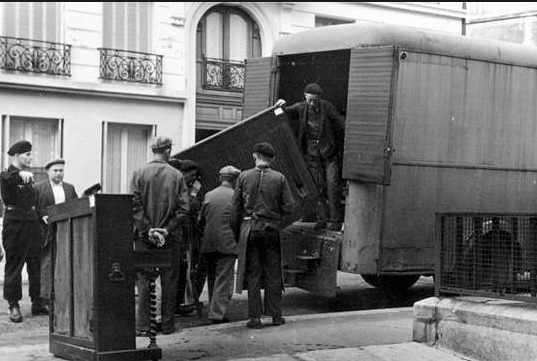 Jewish possessions are loaded onto removal trucks by French workers

First Deport Them – Then Rob Them

Jews forcibly evicted from their home, often with only a few hours’ notice, were ordered to hand over pets to friends, leave keys with neighbours and board transport to an internment camp within the city.

No sooner had their homes been abandoned than a French removal company, hired by the German authorities, would swiftly and efficiently empty the premises of its entire contents.

Behind them they left only bare floors and walls, with rooms stripped of even their doorknobs and lightbulbs.

Stolen Property Was Sorted and Shipped

Removal lorries transported the stolen furnishings to one of several depots where Jewish prisoners were forced to unload and sort the content for onward shipment to Germany. During this process, senior Nazi officers, their wives and mistresses would arrive to take anything they wanted for themselves. 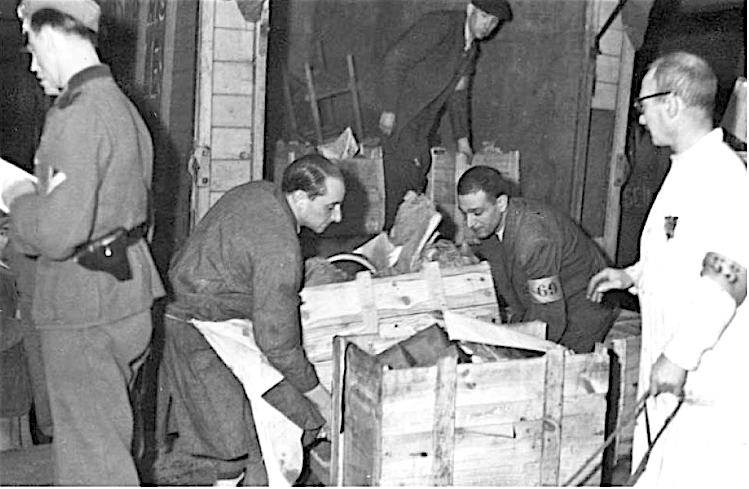 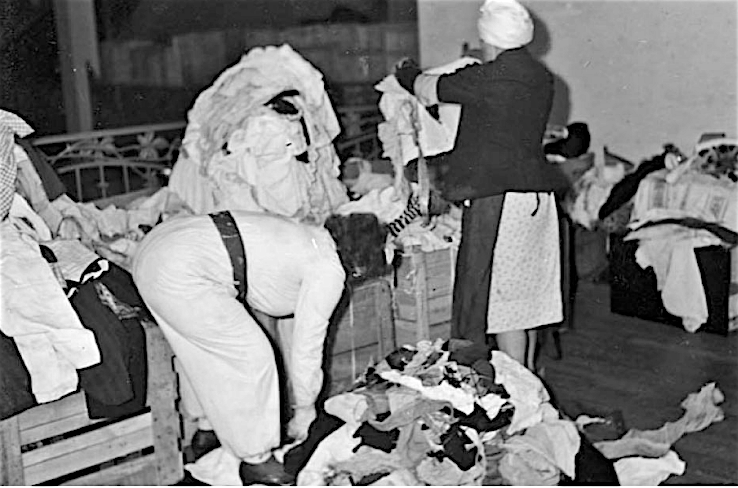 The re-crated items would then be driven to railway stations for shipment to Germany.

Over the four years of occupation, hundreds of trains conveyed the contents of 40,000 Paris houses and apartments. Belongings of the 76,000 French Jews who perished at the hands of the Nazis. 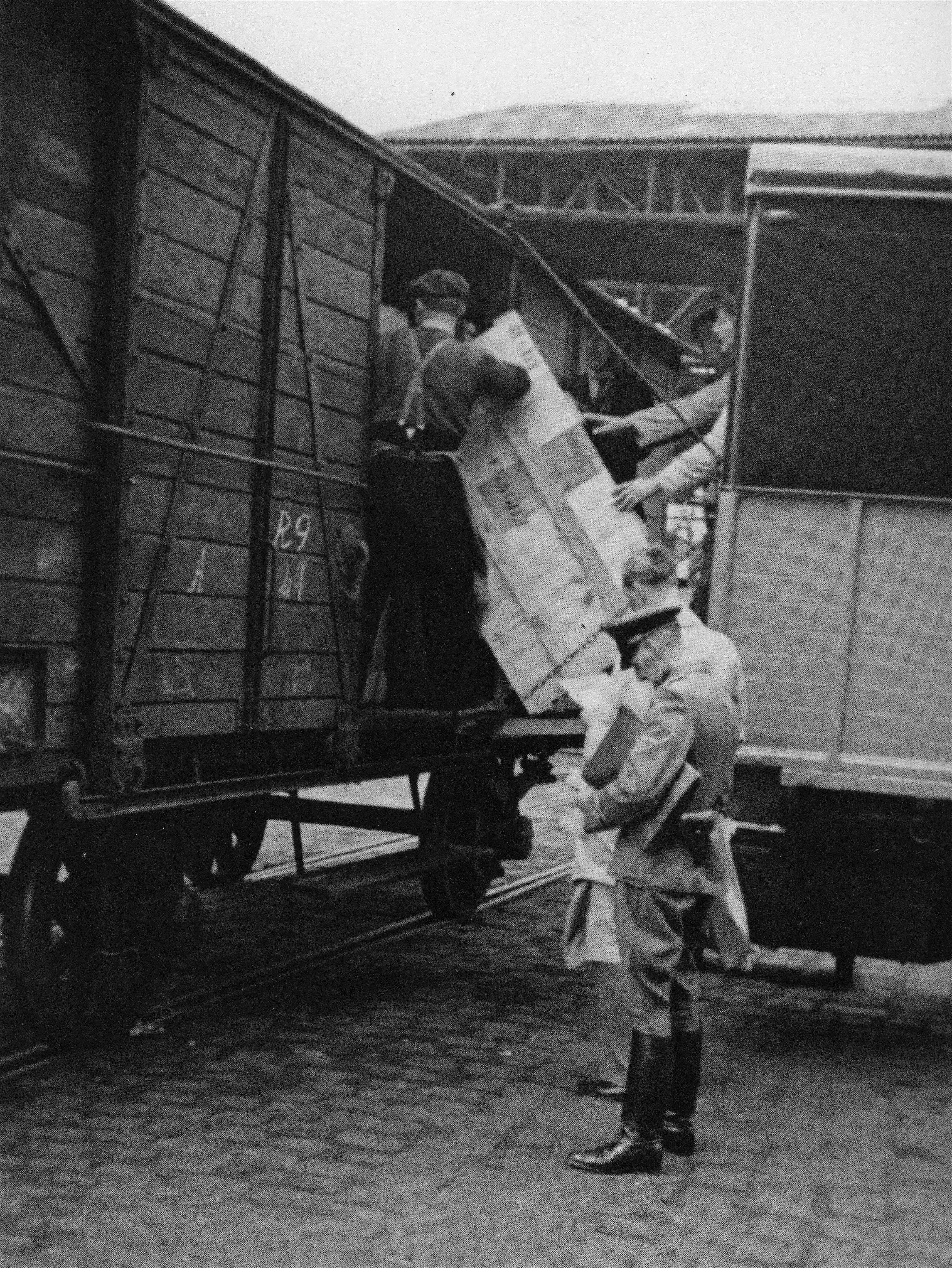 Once in Germany, the loot was distributed to families whose homes and possessions had been destroyed by Allied bombing.

Some Nazis objected, not because they were being asked to handle stolen property, but because they believed anything touched Jews had been ‘Jewified’ and unsuitable for Aryan use!

Robbery Was Organised at the Highest Level

Far from being unauthorised and unofficial, the looting was meticulously and bureaucratically organised at the highest levels of the Nazi Party.

From 1941 onwards a number of organisations, supervised, by senior army and Luftwaffe officers, were responsible for the mass stealing.

In April 17, 1942 Colonel Kurt von Behr was placed in overall command of Aktion Möbel. He was an officer in the German Red Cross which, since 1938, had been made one of the German army’s many auxiliary and paramilitary services.

Behr had been taken prisoner during the First War and become a fluent French speaker as a result, a major reason for his appointment. 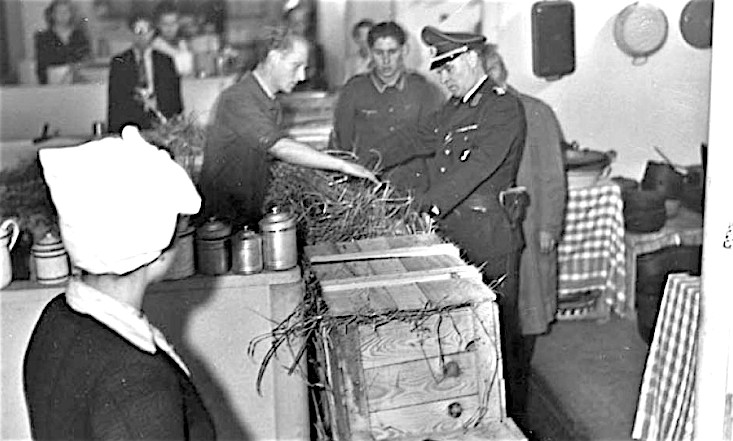 ‘If we came across something good, we displayed prominently,’ another inmate recalled. ‘Then senior German officers and others would come and choose the cutlery sets or something like that. When they came, everything had to be spotless; the floor had to be cleaned and the windows too. And everyone at attention.’

The Lévitan Becomes a Thieves Kitchen

Not all items made it to Germany, or were ‘liberated’ by greedy Nazi officers.

Between July 1943 and August 1944, the Lévitan was turned into both a retail store, selling looted Jewish possessions to German soldiers, and a prison.

Known as Camp Lévitan it housed 795 Jewish prisoners, behind the shuttered windows and locked doors, on the building’s fourth floor.

They worked from six in the morning to seven-thirty each night, seven days a week,  sorting, cleaning, repairing and selling the contents of the 2,400 crates which arrived there daily. 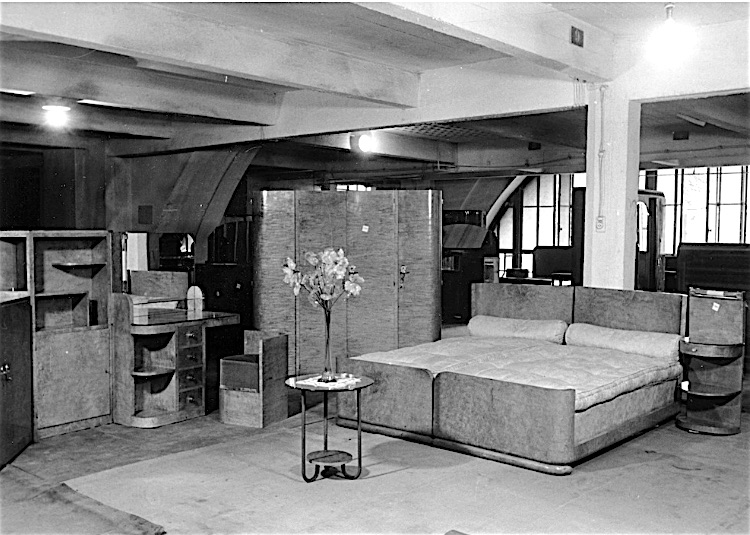 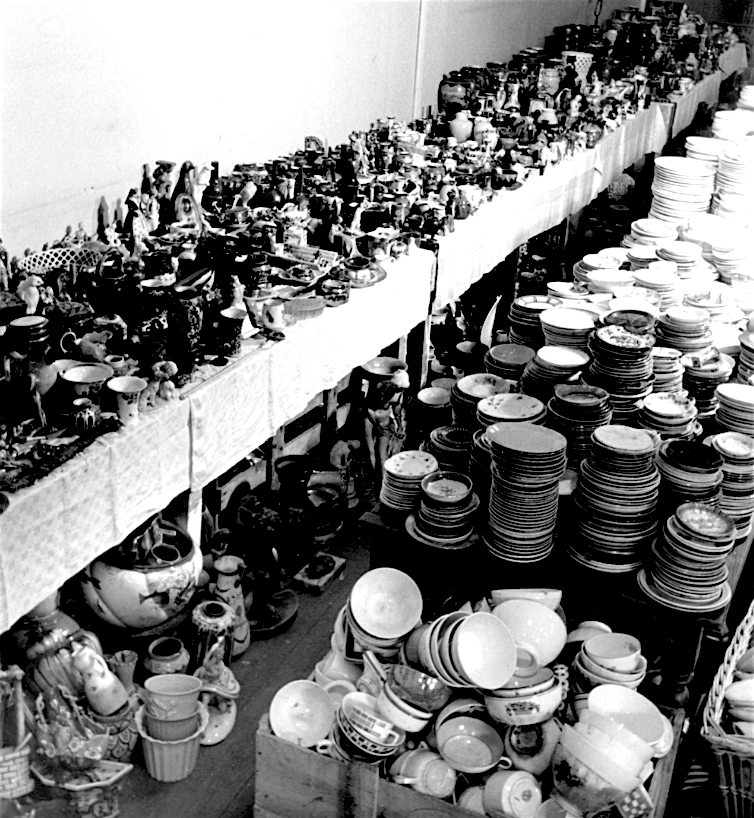 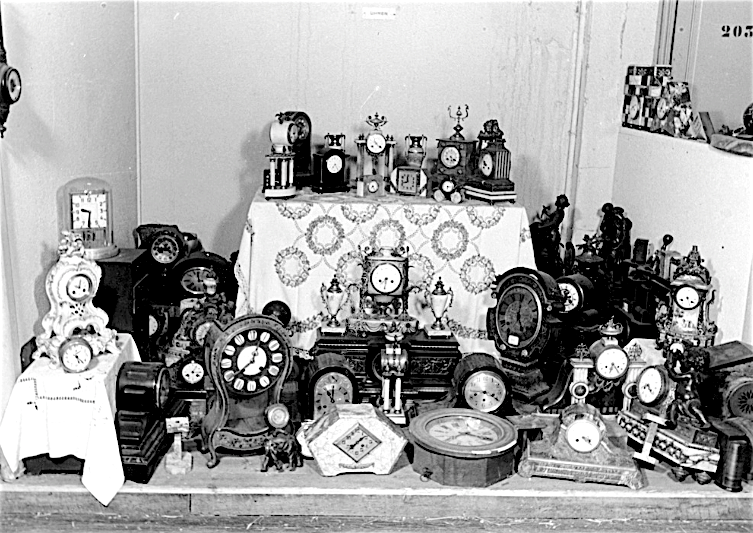 Some of the thousands of stolen Jewish possessions being sold by Lévitan between 1943 and 1945.

A former internee recalls how, on one occasion, she recognised the possessions of her aunt and uncle. ‘There were some drawings my cousin had made,’ she remembers. ‘I took one of the drawings. I kept it with me at all times to protect it and managed to keep it intact.’

Stolen Goods Were Cleaned and Repaired

Many of looted items needed to be cleaned before they could be put up for sale. Sometimes kitchen pots arrived with the remnants of recently cooked meals till inside them. Their former owners had been driven from home while still half way through preparing a meal.

Others items needed repair. The store had a busy tailoring shop in which half a dozen internees were kept constantly busy. 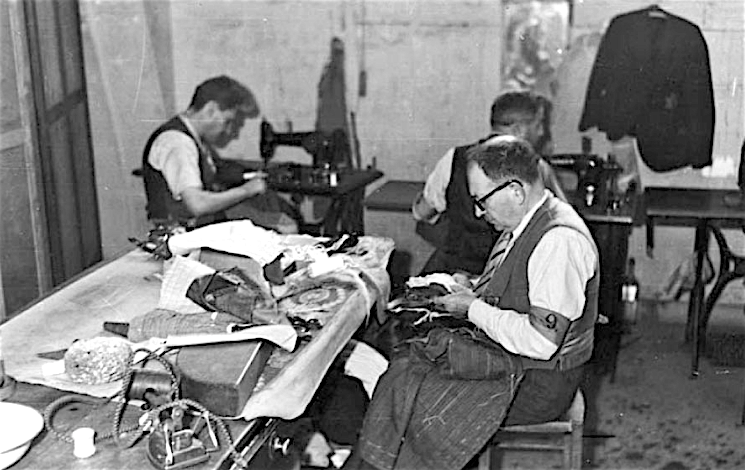 There was a radio repair department servicing the thousands of pilfered wireless and another for electrical goods.

‘Aktion Möbel was, of course, one more way to make money and take advantage of Jews,’ comments historian Sarah Gensburger. ‘But (it was) also a way to be sure that any kind of Jewish existence was destroyed’.

On arrival at the former department store, prisoners discovered there were no washing facilities. They were able to overcome these unhygienic conditions,at least to some extent, by having their clothes washed and ironed by friends on the outside and by supplementing them with clothes surreptitiously removed from the crates they were sorting.

Every moment of every day, they lived in fear of being deported to an extermination camp. After one inmate escaped, by hiding in a removal van, for example his entire work team were immediately dispatched to Auschwitz. Over the year it was in operation, 164 prisoners were deported to the death camps.

All were, in the words of one internee ‘puppets living on borrowed time.’ 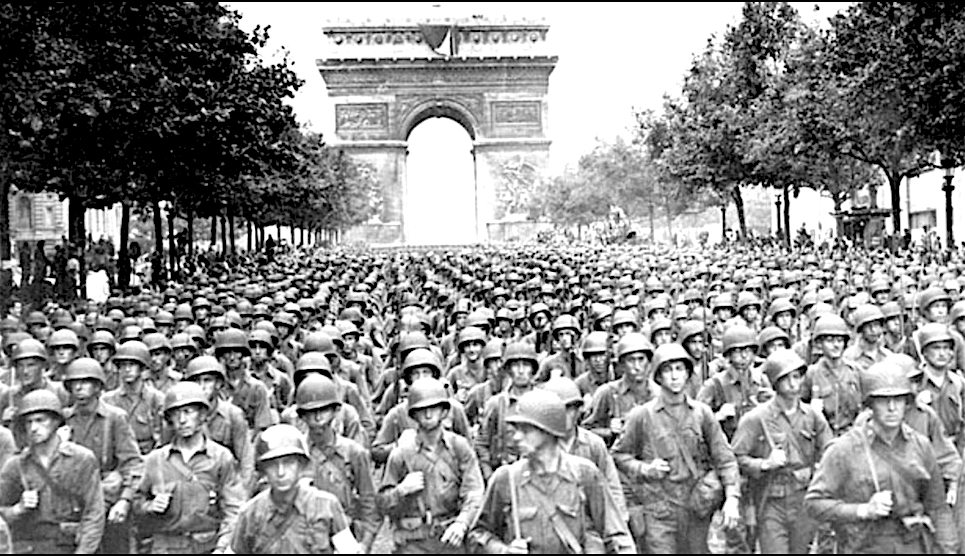 The prisoners’ ordeal only ended with the liberation of Paris, in August 1944. For years after they remained silent about what had happened to them and the story of both Paris’ four Nazi internment camps, the role of the Lévitan and the wholesale theft of Jewish property remained the City of Light’s dark and dirty secrets.

After the war the department store was returned to its Jewish owners but rapidly sold and abandoned.

For many years the Lévitan remained empty, unwanted, untouched and unused with its vast counters and cash registers gathering dust.

In 2000, it was purchased by BETC Euro RSCG, France’s largest advertising agency. Unaware of its unsavoury history the new owners lovingly renovated and restored the long-neglected building. 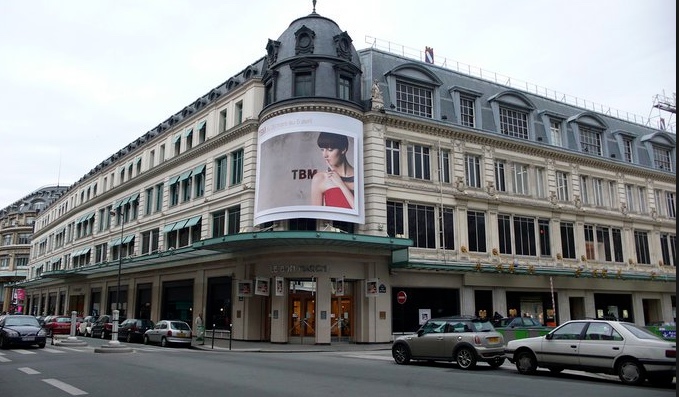 The Lévitan as it is today

Today their account executives and creatives work in rooms where Jewish prisoners once suffered and looted Jewish property was sold to Nazi customers for giveaway prices.

In 1945, Kurt von Behr, by now a hunted war criminal, sought refuge in Banz Castle, a former Bavarian monastery. One summer’s morning he dressed carefully in his military uniform, polished his medals and shot himself in the head. Before doing so, however, he opened and consumed a bottle of champagne. Vintage 1918.

If you are interested in reading more about this little-known story of Nazi theft, I strongly recommend Sarah Gensburger, fascinating and meticulously researched book Witnessing the Robbing of the Jews: A Photographic Album, Paris, 1940 – 1944. Indiana University Press, 2010

In my next blog I will be describing the Zeppelin attacks on Britain, during the First World War, and how they almost brought a terrified country to its knees.