NAZI SEX PARTIES ON THE SPREE

NAZI SEX PARTIES ON THE SPREE

Eric Jan Hanussen was a magician, clairvoyant, astrologer, illusionist, hypnotist, opportunist and charlatan. A multimillionaire businessman, he became Hitler’s personal Svengali, coaching him in showmanship, teaching him to hypnotise the masses and supporting him both financially and via his newspapers. 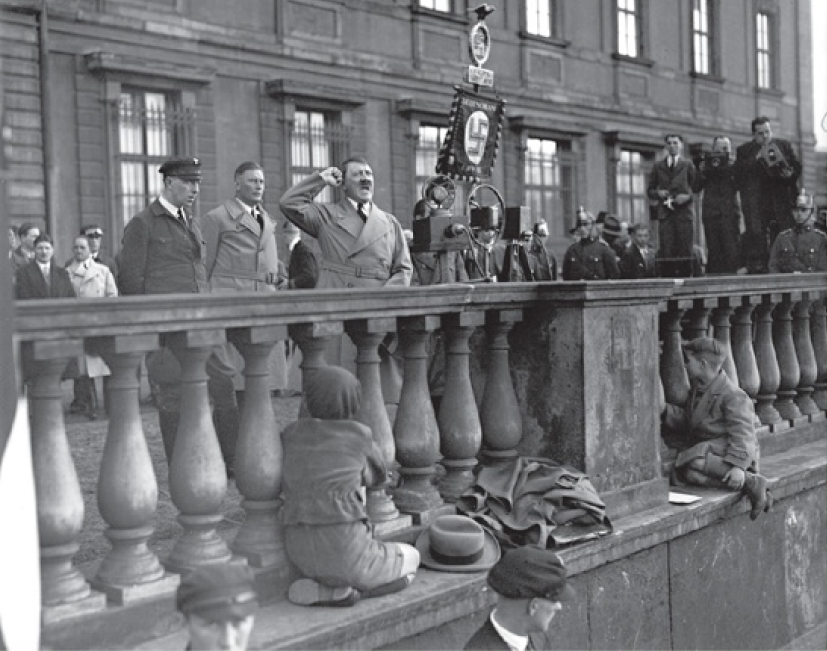 Hanussen standing behind Hitler and to his right

Masquerading as a Danish aristocrat, in Nazi dominated ‘thirties Berlin, Hanussen was, in reality, a Moravian Jew named Erik Herschmann-Chaim Steinschneider. Born in 1889, the same year as Hitler, he was the illegitimate son of a Viennese music hall performer. 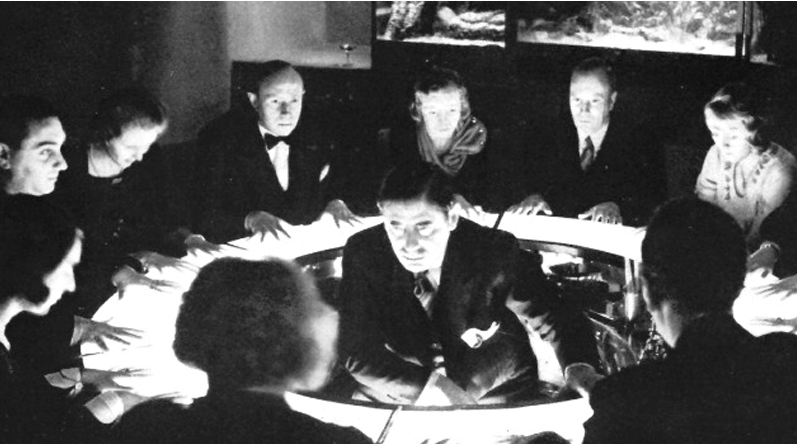 ‘The Man Who Is Never Wrong’

By the start of the ‘thirties he had become the most famous clairvoyant in Germany, performing nightly to sell-out audiences in the city’s prestigious Scala theatre. He was dubbed ‘The Man Who Is Never Wrong’ by a baffled but intrigued Berlin press.

The Scala theatre, Berlin, where Hanussen played to full houses. Demolished after the war it is now a carpark.

In addition to his show business success, Hanussen was a media mogul, publishing a number of best-selling, astrology based, newspapers and magazines. 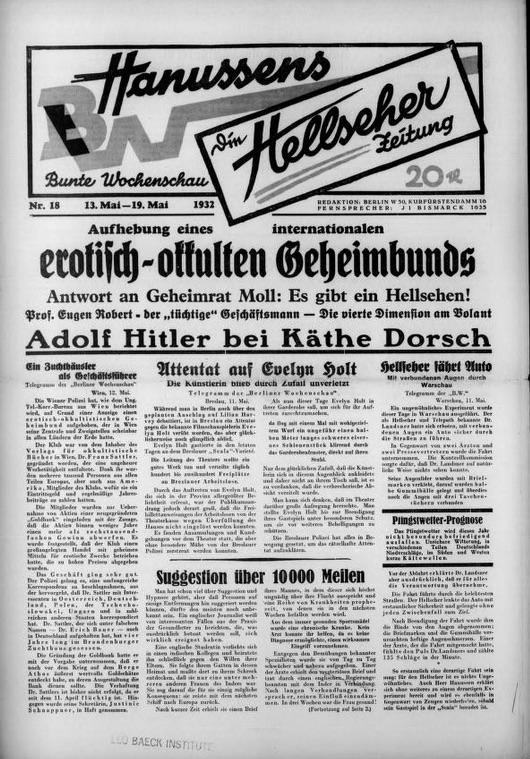 As his wealth grew, the once impoverished magician was able to enjoy a life of increasing luxury and debauchery.

Sex Parties on the Spree

Actresses, singers, dancers, leading business tycoons and high-ranking Nazis all clamoured for an invitation to the lavish and uninhibited parties that he hosted on his private yacht, the Ursel IV. 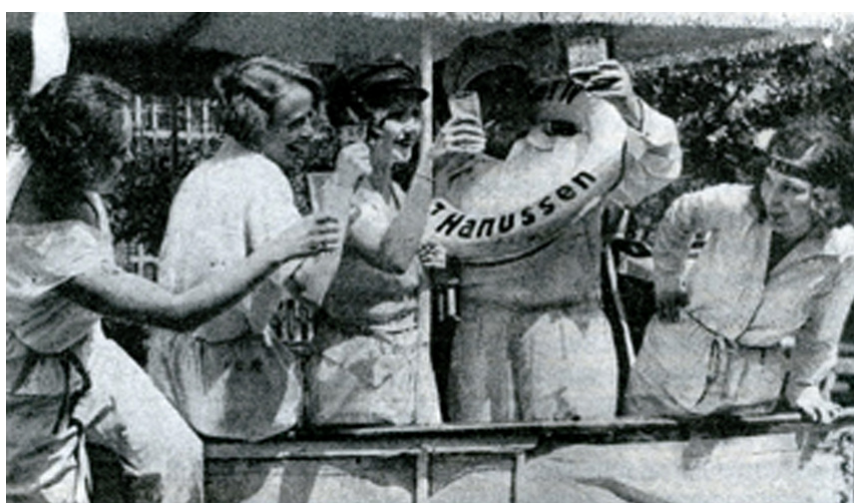 Hanussen and female assistants aboard the Ursel IV

Even in the depraved moral climate of Berlin, Hanussen’s parties were notorious for their hedonism and depravity. So much so that Berliners’ nicknamed his yacht ‘The Seven Deadly Sins.’

While cruising on the River Spree, or in the Baltic, guests were invited to satisfy their most extreme sexual fantasies.  Hanussen plied them with seemingly limitless quantities of champagne, supplied hard drugs and laid on beautiful young girls, many of them aspiring actresses, and handsome teenage boys for their gratification.

What his more depraved partygoers did not realise, until too late, was that these pleasures came at a price.

Blackmail on the Spree

In a repeat of the blackmail scams he had learned while working as a muck-raking journalist on a shady tabloid newspaper, Der Blitz, Hanussen installed hidden cameras and concealed microphones in each of the lushly panelled cabins.

The politicians, aristocrats, movie stars and industrialists caught on film in compromising situations were offered the choice of paying handsomely to keep their indiscretions secret or see them splashed all over his publications, the Hanussen Magazin or Hanussen Zeitung.

Among Hanussen’s close National Socialist friends was Count Wolf-Heinrich von Helldorf. The black sheep of a wealthy and aristocratic Prussian family. Von Helldorf was, in the words of contemporary writer Konrad Heiden ‘a homosexual gangster…from the dregs of the upper classes.’

A former Free Corps officer and extreme Nationalist, von Helldorf had joined the National socialists in 1925. Within six years, been promoted to a senior SA officer and was later made Police President of Berlin.

After watching Hanussen perform at the Scala, Helldorf became one of ‘seer’s’ most fervent admirers and his close friend. As such he was a frequent guest on the Ursel IV. 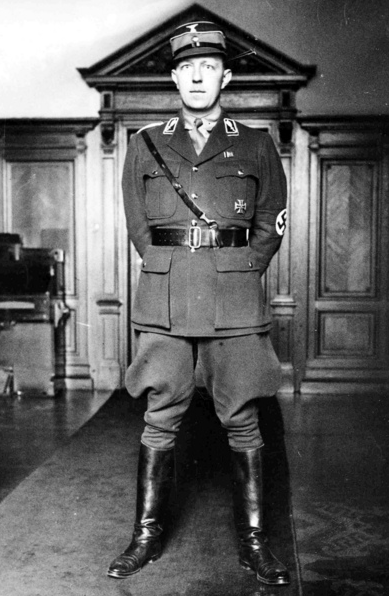 The Flogging of Kabir

A sadistic libertine, von Helldorf used Hanussen’s parties to satisfy his sadistic appetite for beating young men. Among the Ursel IV’s crew was a 14-year-old Indian boy named Kabir. His job was to hand out towels to the bathers as they climbed back abroad after swimming, often naked, in the Baltic.

After a female guest complained the boy had stared at her breasts, while handing her a towel, Helldorf frogmarched Kabir to the Saloon, ordered him to undress, and bound him to a table.

A skilled equestrian, Helldorf always carried a riding crop down the side of one knee length black boot. Wielding this with all his strength, he thrashed the screaming teenager until Kabir passed out from pain.

Perhaps sensing he had gone too far, Helldorf flung down the crop and yelled at the stunned onlookers: “I’m a sadist! I admit it. Were all sadists! In the SA, my friends, one must learn to be desensitised to petty human compassion.”

To keep in with his SA friends, Hanussen started lending increasingly large sums of money to the National Socialists who, following the April 1932 elections, were on the verge of bankruptcy. Wages in the SA had been slashed to such penurious levels that rank and file members only survived by eating at the Communist run soup kitchens.

Even the once wealthy Helldorf was in deep financial trouble having run up more than 150,000 Marks in gambling debts. Hanussen not only paid off all his friend’s debts but even loaned him his brand new, chauffeur driven, Bugatti to drive to the bank and settle his overdraft in style.

A ‘thirties Bugatti similar to that owned by Eric Jan Hanussen

He donated 10,000 Reichsmark to purchase fur-lined boots for the SA and gave a new, luxury American car, a LaSalle, to SA-Sturmbannführer Karl Ernst.  His chauffeur was also a SA-Sturmbannführer and always wore his Nazi uniform when driving the clairvoyant around. His secretary was a National Socialist and member of the SA, while his managing director was in the SS. 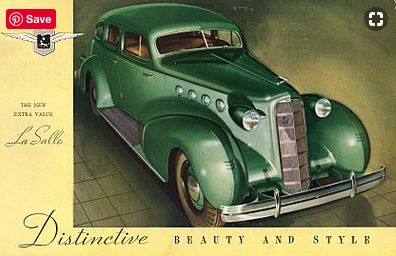 In making these loans and gifts, Hanussen was demonstrating less his generosity or a love of the Nazis, but sharp business sense. An opportunist, who had recognised Hitler’s importance as a future political leader long before he came to power in 1933, he had begun the cultivated National Socialist friends soon after arriving in Berlin at the end of the ‘twenties.

As a Jew masquerading as a Danish citizen he must have calculated that having friends in high places might, one day, prove a life saver. In this he was sadly mistaken.

What the clairvoyant had proved skilled at predicting the future of others, he failed to foresee the violent fate awaiting in March, 1933.

In my next blog I will describe what that was and how it engulfed not only him but some of his high-ranking SA friends as well.

As to the fate of the Ursel IV, the luxury yacht was most likely seized by the Nazis, along with his other possessions, after Hanussen’s brutal murder. Whether it survived the Allied bombing and artillery fire which devastated so much of a once beautiful city, remains unclear. If anyone reading this blog has any information I would be most interested in learning the vessel’s ultimate fate.