Horst Wessel and the Making of a Martyr – David Lewis

Horst Wessel and the Making of a Martyr – David Lewis

‘Overnight the streets seemed to have turned Nazi,’ British journalist Michael Davidson, reported from Berlin in 1933. ‘Overnight the air, which before had been soft and warm and human, had become harsh and malignant. Strutting police officers wearing swords flaunted their Hakenkreuz (Swastika) armbands…The streets were brown with clumping SA free now to bully and chivvy and show their power – soon they were picketing the doorways of Jewish shops like Wertheim… loudspeakers blared at every street corner – the interminable Die Strasse frei of the ‘Horst Wessel Lied’, sickeningly beautiful as a deadly snake.’

What Was the Horst Wessel Lied?

Who was Horst Wessel and how did the song come to be so hugely popular and so closely identified with National Socialism and its jackbooted thugs of the Sturmabteilung (Storm Sections)?

In this blog, I want to explore the background to his short and brutally ended life. And to the song he wrote, now banned in Germany and Austria, that became the Party’s national anthem and was bawled out by Nazi soldiers in every country they invaded and occupied.

To understand their history,  and the myth making powers of Hitler’s propaganda minister Joseph Goebbels, we need to go back to June 1927, and the publication of his  new newspaper Der Angriff (The Attack). 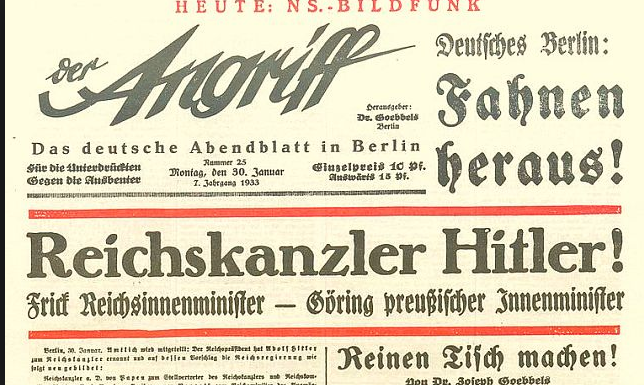 The story of this newspaper and its role in the rise to power of the National Socialists, is a fascinating one which I will describe in more detail in a future blog.

On 19 January, 1930, a story which played right into the myth making strengths Goebbels and his editor-in-chief Joseph Lippert, came with the shooting of SA Sturm leader, Hans Wessel, by the Communists.

Who Was Horst Wessel?

The son of a Lutheran pastor, Wessel was born on September 9, 1907, in Bielefeld, a small town in north-east Germany. In 1926 he moved to Berlin to study law and, in December of that year, joined the SA. An able organiser and eloquent speaker he rapidly impressed his superiors, and became popular among other troops. 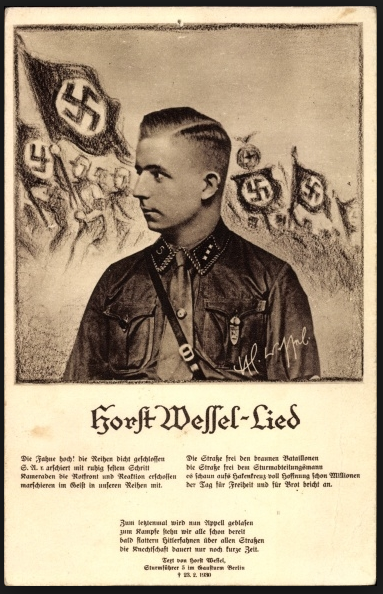 A portrait of Hans Wessel with the words of his song, or Lied, shown below

In 1929, he was promoted to leader – Sturmführer – of Storm 5 located in a Communist controlled district of Berlin dubbed ‘Red Friedrichshain.’

What led to Wessel’s shooting has never been completely explained. According to the Communists, he was shot in an argument over a woman. Prominent Jewish columnist Bella Fromm, described him as ‘a cheap pimp; who was most likely killed by the friend of a girl whom he was pimping’.

In September 1929, he had invited a girlfriend, prostitute Erna Jaenicke, to move into his flat with him. On January 14, the following year, he was been gunned down by Communist, Ali Hoehler in a dispute, it was claimed, over a share of the money Jaenicke was earning.

More recently, in a 1982 article for the Journal of Contemporary History, ‘Goebbels, Horst Wessel, and the Myth of Resurrection and Return’, American historian Jay Baird makes it clear that Jaenicke’s prostitution had nothing to do with Wessel’s murder.

He describes how the young Sturmführer was in trouble with his landlady, Frau Salm, over the fact that he was not only living in sin with Jaenicke but doing so in her apartment building.

Frau Salm also complained about the rowdy meetings he and his fellow SA Troopers Wessel frequently held in his flat, which was just above her own.

After her protests had gone unanswered for almost six months, she complained to the local branch of the Communist Party, whose headquarters were located in a nearby tavern, ‘Der Baer.’

Because they resented and feared Wessels’ popularity among local working-class voters, they agreed to ‘take care’ of things.

“You know what this is for”, Hoehler yelled before shooting the SA man at close range and fleeing.

Had Wessel received prompt medical treatment, his  life might have been saved. But he refused to use the services of the nearest doctor, because he was a Jew, which meant it was some time before he was taken to the Freidrichshain Hospital.

After lingering, in considerable pain,for five weeks he died on 23 February, 1930.

Seventeen SA men, were gunned down in Berlin between 1926 and August 1932 (out of some 350 throughout Germany) and all had been extolled as martyrs who made the ultimate sacrifice for the cause. 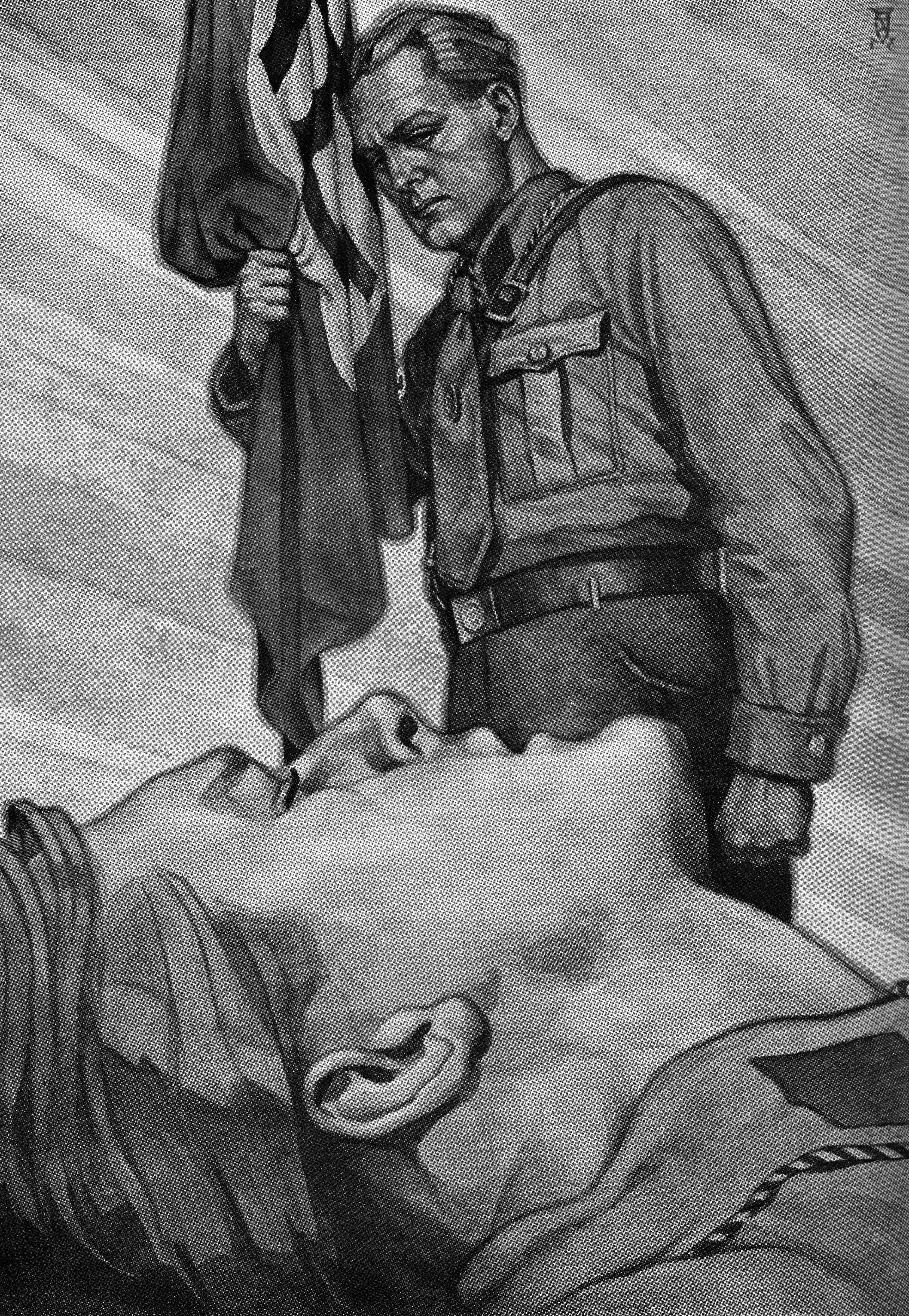 But where Wessel was concerned Joseph Goebbels and Der Angriff determined to create a legend about him before he had died.

On 19 January, they published an article which claimed the dying SA man, had been attacked because the Communists, who could not match his dedication and enthusiasm as ‘the most active storm leader of Berlin’, shot him as a warning to others.

The article accused not only the Communists but whole justice system of the crime.

Ali Hoehler, they wrote, had been arrested for assault a short time earlier, only to be broken out of jail. They also reported he could never now be brought to trial because the Communists had helped him escape back to the Soviet Union.

Goebbels and the Making of a Martyr

An article, written by Goebbels himself, described how his hospital bed, Wessel was surrounded by ‘SA comrades, candles and flowers,’ while ‘on the wall hangs a picture of his father in his vestments. The room was blanketed in silence with onlookers weeping quietly.’

Horst Wessel, Goebbels reported was ‘fighting…his hardest battle: that against the death. In spite of his condition – he could neither eat nor drink – Wessel looked forward to visits from his comrades.’

Despite losing two litres of blood. ‘He was conscious throughout the ordeal, and in spite of the pain, had not so much whimpered. Suddenly the Storm leader began to speak: “We must endure!” he said. “We are still needed…I am so happy!” The Gauleiter gave Wessel his hand but could no longer contain his grief and had to leave.’

Wessel is Compared to Christ

‘The newspaper,’ comments historian Russel Lemmons, in his book Goebbels and Der Angriff, ‘began using Christian motives in the creation of the Horst Wessel myth.

A cartoon (see below) appeared on January23rd depicting the “Holy Sacrifices” of the Berlin National Socialists. 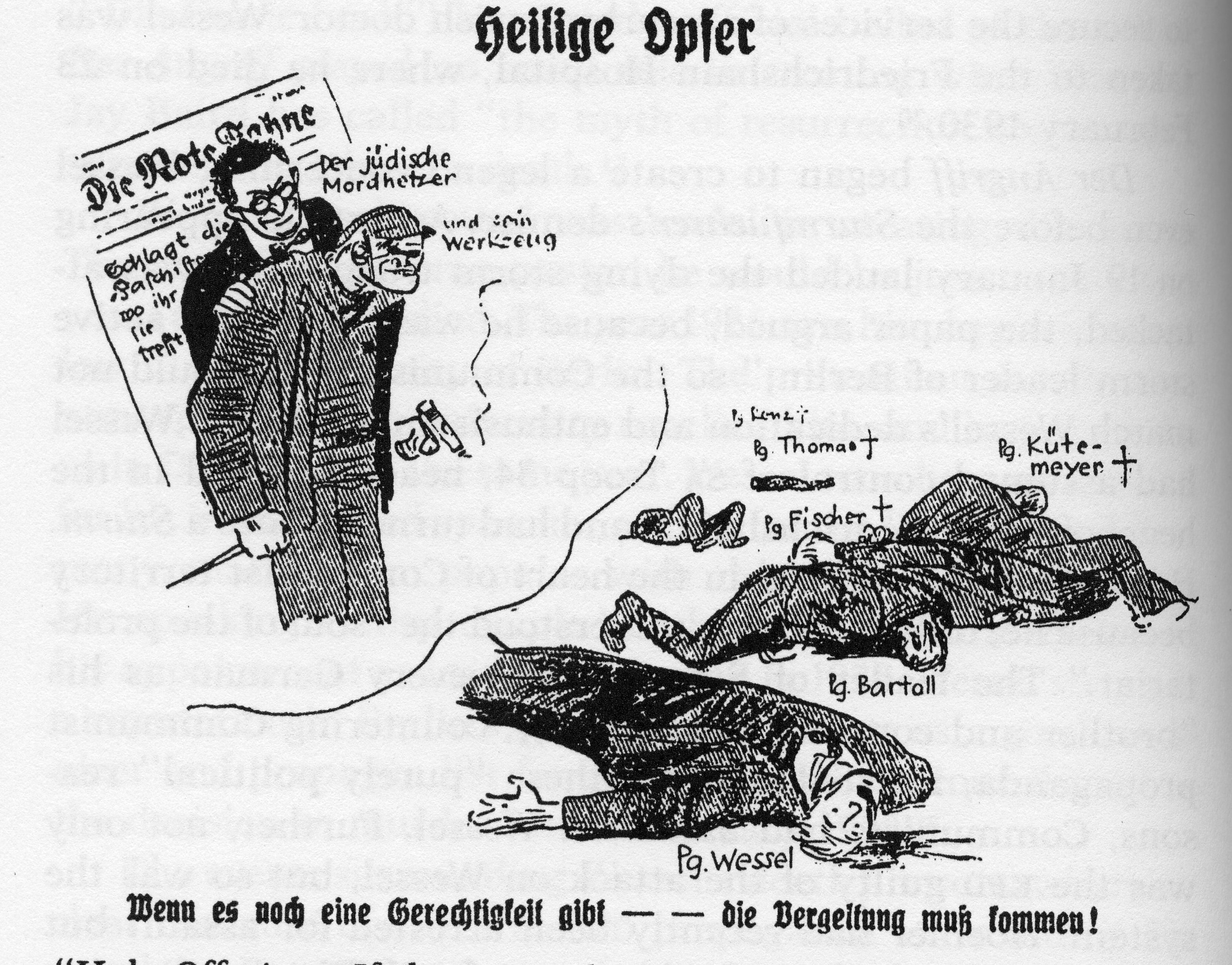 On the ground are the bodies of several ‘martyred’ Storm Troopers and two men, one of them holding a pistol. Behind him, standing in front of the masthead of the Communist newspaper the Rote Fahne (The Red Flag), is the “Jewish murderer” the (other) his ‘willing tool.’

The caption reads ‘If there is to be justice – retribution must come.’

After Wessel’s death Der Angriff grafted another Christian theme onto the myth – that of victory over death. The storm trooper was not really dead at all, they claimed because his memory would live on in the hearts and minds of the comrades he left behind.’

Over the months and years and followed Goebbels, Der Angriff and the Nazi Party set out to ensure that their prophecy of Wessel’s having everlasting life was fulfilled.

He was featured in numerous books, newspaper stories, magazine articles, poems, sculptures. Even a schooner was named after him. 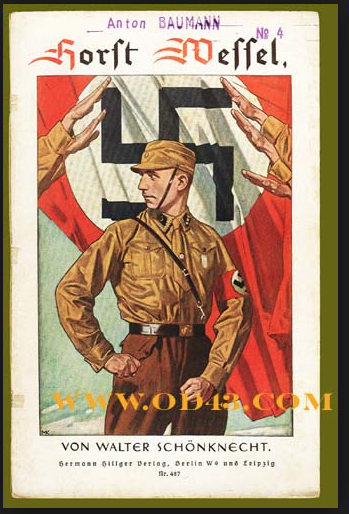 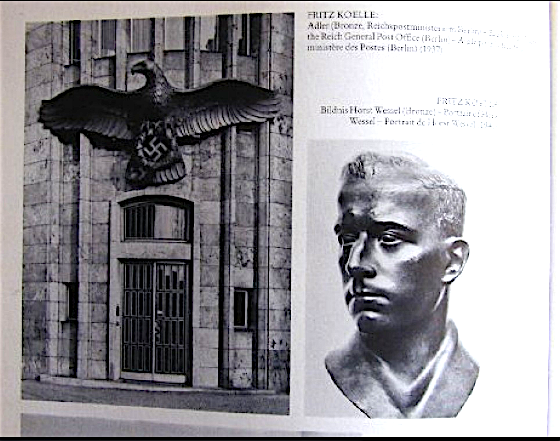 A bust of Wessel

A film, Hans Westmar, based on Wessel’s life was made in 1933. The extent to which Der Angriff was able to create the myth of fallen hero coming back to life, can be seen in the end sequence (below) in which marching SA men have Wessel’s ‘ghost’ superimposed over their ranks.

As the clip shows, the film even includes Communists – including Stalin – so moved by the SA man’s ‘sacrifice’ they reluctantly raise their hands in a Nazi salute.

But probably his most enduring legacy was the peon of praise to the SA written not long before his death. The banality of its words can be judged from the translation below. The music was not original but a traditional folk tune popular in Northern Europe. Ironically, as a Berkeley musicologist has pointed out, the tune for the hymn How Great Thou Art comes from the same source! 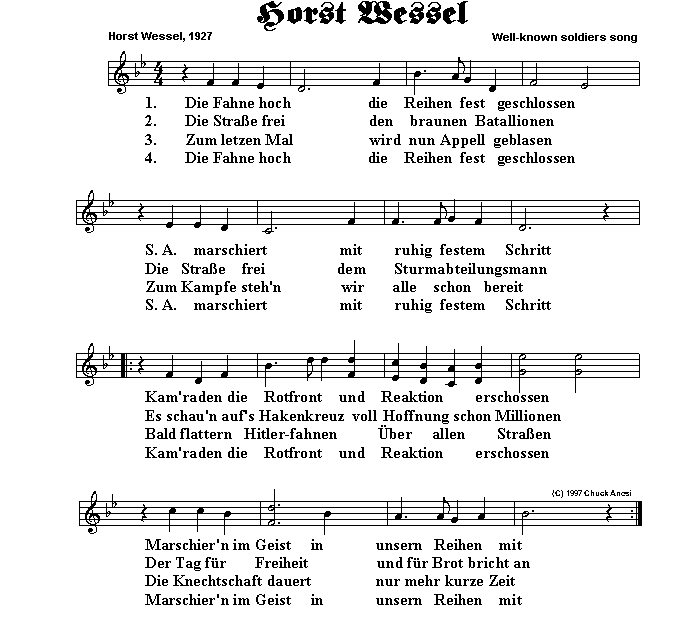 The words of the Horst Wessel Lied, in translation, are as follows:

The banner raised, Our serried ranks together,

The SA men march with firm and forceful steps.

Our comrades shot by Red Front and reactionaries

Though dead, in spirit march on with us yet.

The street free for the brown battalions,

The street free for the Storm Troopers.

Soon fluttering Hitler banners  in the streets are abounding

This serfdom now will soon be at an end

The day dawns for freedom and for bread.

The banner raised, Our serried ranks together,

The SA men march with firm and forceful steps.

Our comrades shot by Red Front and reactionaries

Though dead, in spirit march on with us yet.

This blog is written entirely for information and educational purposes and should not be taken as an endorsement of the foul creed that was National Socialism. As a psycho historian I’m concerned solely with pointing out the lessons history can teach us about the power of propaganda and the ability of those in authority to manipulate the emotions, beliefs, attitudes and actions of once decent men and women. They are lessons urgently needed in these times of political turmoil.

In my next blog I will be looking at evidence which suggests that, far from being a political aberration unique to the German character, a a tragedy similar to the domination of Right Wing Nationalism by the Nazis almost arose in England  as a result of the social and financial turmoil of the 1930s.