Eric Hanussen’s Palace of the Occult

Eric Hanussen’s Palace of the Occult

On 26 February, 1933, as the Weimar Republic entered its final days and Hitler was on the verge of seizing absolute power in Germany, Hanussen held an opening night gala for his newly created Palace of the Occult (Palast des Okkultismus).

It had taken two months, with craftsmen working around the clock, to convert an apartment at 17 Lietzenburger Strasse, in a fashionable district of Berlin,  into what one writer later described as a ‘supernatural appendage to Versailles. An exquisite pagan temple supplemented with the latest 1930s technologies.’ 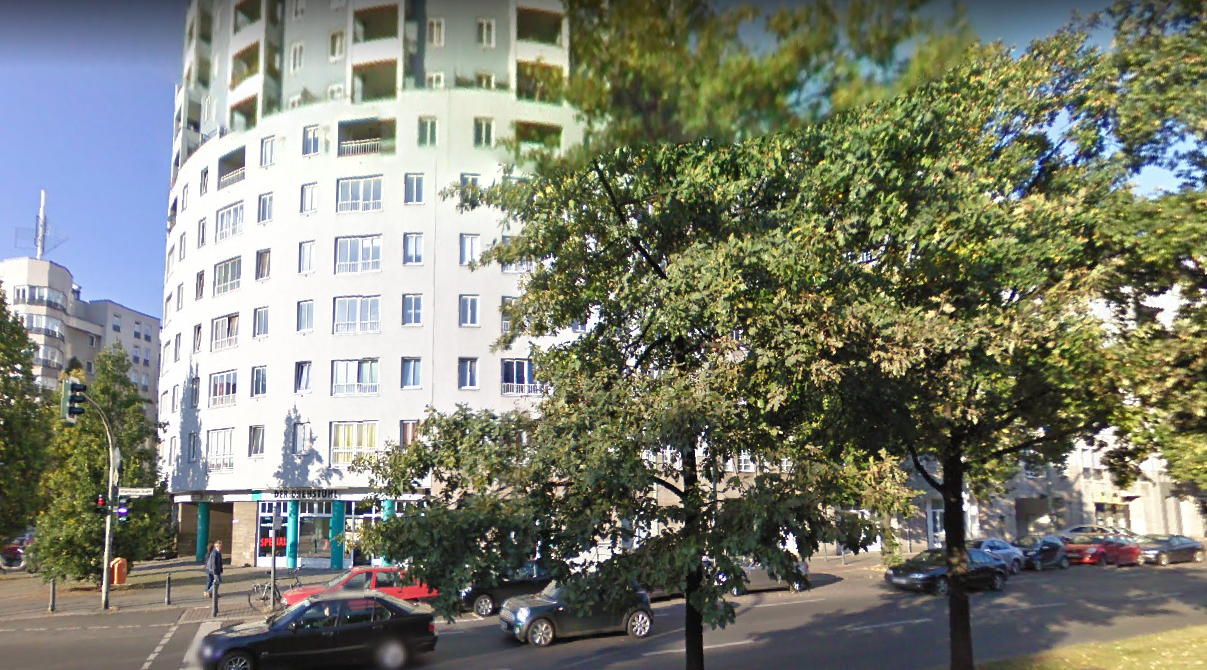 Google Image of 17 Lietzenburger Strasse as it is today

Among them were Louis Ferdinand, the Prince of Prussia and a White Russian lady who claimed to be Grand Duchess Anastasia Nikolaevna Romanoff of Russia.  There were ambassadors, artists and stars of stage and screen as well as high-ranking SA officers in uniform. Among them Count von Helldorf, Karl Ernst and Wilhelm Ohst.

A few weeks after the gala, as I will describe in an upcoming blog, Ohst would be one of the three men who abducted, tortured and murdered the clairvoyant, 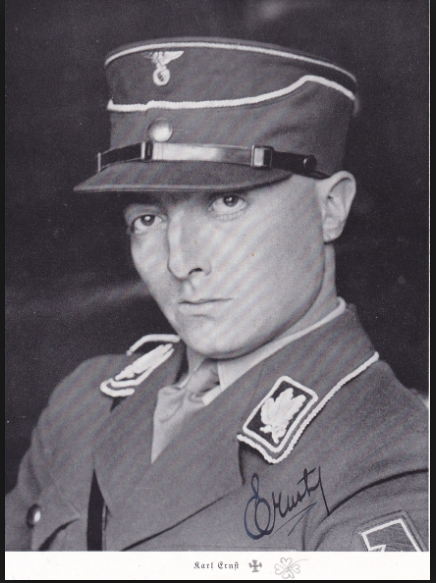 SA member Karl Ernst. A bi-sexual he was to be murdered  but the Nazis while on honeymoon with his new bride

On entering the candle-lit foyer, guests were greeted by blue-eyed, blonde haired, ‘priestesses’ scantily dressed in thin white and pale green tunics. Indian prayer stools lined the walls of an entrance hall dominated by a giant bronze statue of Hanussen. Dressed like Caesar in a toga and with his left arm raised in a Nazi gesture of victory, it stood in the centre of the exquisitely tiled floor.

The high domed ceiling was decorated with stars and mystical Egyptian and Babylonian astrological signs. Spotlights lit up walls painted grey and purple and four large Buddhas stood in each corner.

At precisely 10 o’clock, a green mist filled the crowded room and an organ began playing the thunderous music of Wagner.

‘The lights dimmed and went out, leaving only a brilliant spotlight slashing down on the centre of the floor,’ recalls Joe Labéro, one of the guests. ‘Hanussen was not in sight. Slowly, the floor moved, a chasm appeared in it. Two panels slid backwards and a throne rose majestically to tower fifteen feet in the air. On an ebony-black throne was Hanussen clothed in a scarlet robe. He was holding a large crystal, with coloured lights flickering through it, and there was a half-dazed expression on his face. He began to speak, his rich voice seeming to come from the walls. He predicted the blood purge that was to come later and the war with England, Russia and America.’

Following his dramatic entrance, Hanussen and ten of his most important guests, including Count Helldorf, whose notorious behaviour I described in my previous blog, were handed white rubber slippers to place over their shoes and instructed to remain absolutely quiet as they were ushered into the Hall of Silence.

A Prophecy of Fire

In this inner sanctum, which Hanussen reserved for private psychic readings, people were seated around a circular table and told to place both hands, palms downwards and fingers splayed, against its frosted-glass surface. Beneath it was a wheel, decorated with occult symbols, which slowly revolved. Hanussen, seated on a swivel chair in the centre of the table, waited until the wheel stopped and then foretold each guests’ future based on the mystical signs beneath their hands. 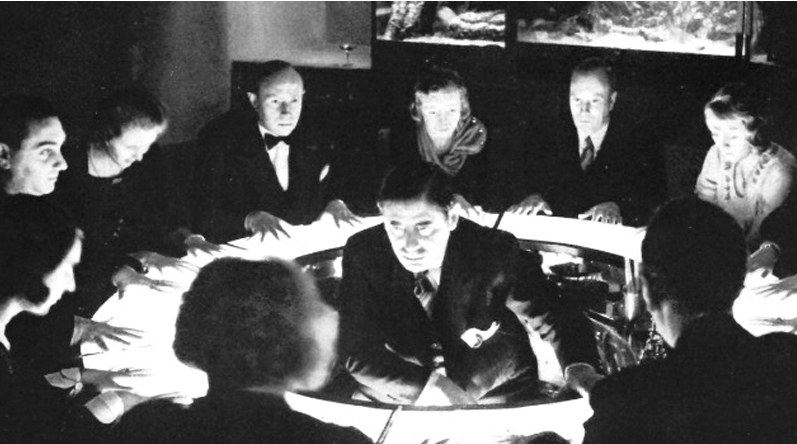 Eric Hanussen conducts a seance in his ‘ Hall of Silence’

The readings completed, he asked for a volunteer to help with mind reading.

When no one came forward, he selected Maria Paudler, a popular young actress, who had just arrived from the theatre where she was performing.  ‘I didn’t want to be a spoilsport,’ she recalled in her autobiography Laughing Has Also to Be Learned. 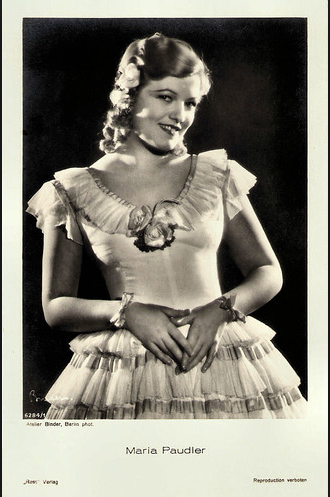 Hanussen escorted her to an easy chair, facing the other guests, and offered her a glass of champagne. ‘Then,’ she recalled ‘the small man…. waved his hands around my head, trying to pierce me with his eyes.’  When this failed to send her into a trance he started to stroke her face, something she initially found extremely unpleasant. After closing her eyes, she felt herself start to float away. From what seemed like a great distance she heard Hanussen asking, in a soft and persuasive voice whether she could see red circles. When she agreed that she could, he asked if they were actually flames ‘coming out of a big house’?

A Great Building in Flames

The more he persisted with these images, the more she began to feel that: ‘This whole scene was getting beyond a normal parlour game and I was being used as more than an object of entertainment by this gentleman. I really did not want to be used in this manner… what does a lady do at a moment like that? She faints! After all, why shouldn’t I take advantage of my womanly prerogative.’ 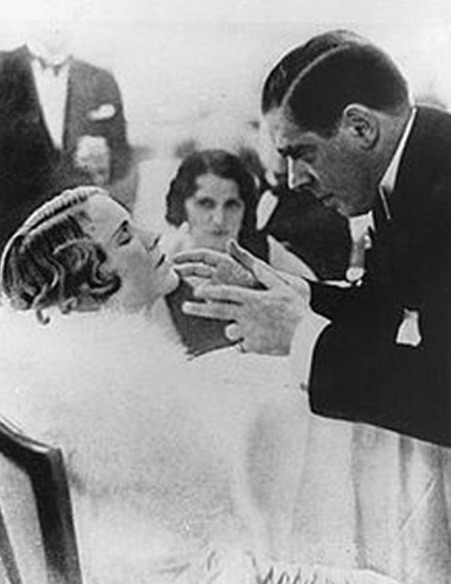 In my next blog, I describe the devastating consequences, for Germany and the rest of the world, of this fire and reveal that Eric Hanussen may well have played a key role in it.