Could It Have Happened Here? David Lewis

Could It Have Happened Here? David Lewis

In 1956, Kevin Brownlow, a 17-year-old trainee editor with World Wide Films, was carrying cans of film, from their offices in Soho Square, when he saw something that was to change his life.

A black Citroen suddenly screeched to a halt in front of him. A man jumped out shouting in German as he ran towards a nearby delicatessen.

It was all perfectly innocent.

But to young Kevin, who had lived through the horrors of the Second World War, it seemed like a scene out of a movie.

Into his mind came the idea that this is what would have happened had the Germans occupied Britain and the Gestapo taken charge.

Then he had another thought: ‘What if it had happened here?’

From this idea, sprang a plan to make a film about the consequences of a Nazi invasion to be titled  – ‘It Happened Here’.

Co-opting a teenage friend, Andrew Mollo, who was studying sculpture at the nearby Regent Street Polytechnic, Kevin began writing an outline.

Within a few weeks he was shooting his first scene, a gathering of the Nazi elite in Trafalgar Square. 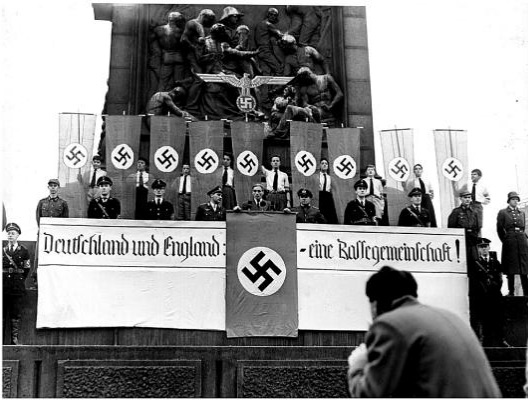 Kevin on his first day of filming in Trafalgar Square. It was, he admits, a disaster

Over the almost nine years it took to realise their dream, the young filmmakers had to overcome endless difficulties, setbacks and problems – not least finding the money to finance it all. They also faced, what Kevin described in his excellent book How It Happened Here,  as the ‘incompetence, indifference and direct sabotage’ of industry insiders. 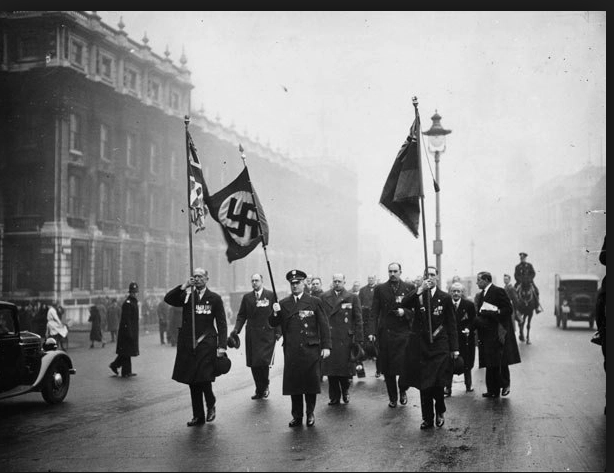 A still from ‘It Happened Here’ by Kevin Brownlow and Andrew Mollo. Filming began when they were in their late ‘teens. By the time it was finished they were in their mid-twenties! If you are interested in learning how hard it was, and still is, to make a film, I urge you to read his fascinating and frank account of the challenges and disappointments he and Andrew had to overcome.

When the film was finally released, in 1966, it not only proved a commercial success but rapidly became a classic of the independent cinema.

You can watch the film’s trailer, released by the British Film Institute, below.

But how probable was such a disastrous event, in either the First or Second World War?

The, perhaps surprising, answer is that invasion and occupation were more likely to have occurred in 1917 than in 1940. This, despite the well justified fears of, and massive preparation for, a German  invasion following the evacuation of the remnants of the British Army from Dunkirk in May and early June of the same year.

In February, 1917 Arthur Zimmermann, a Staatssekretär (top civil servant) in the German Foreign Office sent a coded message to Heinrich von Eckardt, German ambassador to Mexico. Intercepted and decoded by British Intelligence it informed the ambassador of their plan to starve their enemy into surrender through the use of ‘unrestricted submarine warfare.’  From the first of the month onwards, they would, without warning, torpedo each and every ship, neutral or not, that tried to sail in British waters. In this way the food and raw materials on which their ability to wage war depended would be denied to the British.

Within a few months, their brutal and relentless campaign was producing the hoped for results.

Increasing food shortages exacerbated class tensions and discontent was further compounded by the unpopularity of conscription, which had been introduced at the start of 1916, and the rising casualty lists. So heavy was the death toll, that almost everyone had either lost a loved one or knew family that had.

Public opinion began, with increasing stridency, to voice a belief that the time had come to bring the war to an end and the soldiers back home.

In May that year, similar levels of hunger and public discontent in Russia, had led to bloody revolution, the fall of the Tsar and the rise of Communism.

Now it seemed, to many in the British upper classes at least, a similar fate might befall them.

If this British troops, following the Russian example, mutinied the country would be open to German invasion and occupation.

To prevent what they regarded as an unmitigated catastrophe,  those in power quickly mobilised the twin forces of Propaganda and Censorship. At the same time there was a call for increased Patriotism and support for ‘our boys at the Front.’

‘The government underlined the ‘moral’ and legitimate self-defensive nature of the war,’ comments Matteo Ermacora, of the University of Venice, ‘and used patriotism and cooperation as emotional moulds.’

Although still bubbling beneath the surface, overt political and social discontent had, at least the time being, been brought under government control.

On 16 July 1940, Adolf Hitler issued Directive Number 16. This stated: ‘As England, in spite of the hopelessness of her military position, has so far shown herself unwilling to come to any compromise, I have decided to begin to prepare for, and if necessary to carry out, an invasion of England… and if necessary the island will be occupied.’

Despite lacking any sort of plan, Hitler further announced his invasion fleet would be ready to embark by August 15, and the operation would be codenamed Sealion.

The Luftwaffe Seeks to Dominate the Skies

In preparation, the Luftwaffe immediately sought to establish command over the Straits of Dover by attacking Channel ports and shipping. At the same time the Germans installed heavy guns around Calais. From the second week of August heavy shelling of the Dover area began.

So intense was the threat posed the Royal Navy was forced to withdraw its larger warships from the Channel, thus opening the way for hundreds of Hitler’s troop laden invasion barges to cross the twenty miles separating England from mainland Europe.

In Berlin, Hitler expressed delight at the way things were going. Surely, he reasoned, in the face of military pressure and the threat of invasion the British would admit defeat and so render Operation Sealion unnecessary! When his offers of peace were dismissed out of hand, it became increasingly clear to him that what had started off as a bluff on his part, would have to become a reality.

A Meeting in the Mountain

On the last day of July, Hitler called a meeting at his Alpine retreat, the Berghof, to hear from his Generals about progress. Their news was less than encouraging.

They reported that, with no time to construct tailor-made invasion barges, they were having to commandeer cumbersome wooden ones intended for canal use. These far from adequate vessels were, furthermore, constantly being attacked and destroyed by the RAF.

German naval commanders pressed for the invasion front to the reduced from Hitler’s proposed 200 miles – from Ramsgate in the east to Lyme Regis in the west – and the invasion date extended by seven months to May, 1941.

Hitler reluctantly agreed to narrowing the front. The most westerly landing area would now be Worthing and moved the invasion date to September 16th.

But, even as he granted these concessions, his mind was moving away from an invasion of Britain to an all-out assault on his then ally, the Soviet Union.

On 17 September, he postponed Operation Sealion indefinitely. In June the following year, he invaded the Soviet Union.

Kevin Brownlow’s dystopian vision of a Nazi dominated Britain never came to pass and perhaps, in 1940, was less likely to have done so than many at the time feared.

For the second time, in less that twenty-five years, the island nation had escaped the seeming inevitable.

But, in the words of the Duke of Wellington after Waterloo: ‘It was a damned close-run thing.’

In my next blog, ‘A Soldier’s Tale’ I shall recount the short and tragic life of a young German who fought and died for Hitler on the Russian front. It’s the story that will be familiar to anyone who has served in the armed forces.