Otto Franz Rudolf Feyerabend was born on August 28, 1876, at Bönkeim in East Prussia.

His parents were farmers and, as a young man, he followed in their footsteps. In 1914, at the age of thirty-eight, he joined up and saw action on the Western Front. After 1918, he became a civilian employee of the German army.

The Treaty of Versailles

This Treaty, imposed by the victors over the vanquished, placed severe restrictions on the size of Germany’s armed forces. Limitation the Prussian military soon found ways of getting around.

Factory workers were told that they were making parts for sewing machines when they were, in reality, manufacturing machine-gun parts.

The German Navy’s so called ‘pocket-battleships’ were cleverly designed to pack a heavier punch into the smaller, more manoeuvrable vessels. Submarines, strictly prohibited under the Treaty were secretly built in Holland.

Hundreds of men, like Otto, were employed as civilians by the military, to keep the troop numbers low, although they were soldiers in all but name. By 1939 he had risen to Oberfeldintendant, in German Army Ordnance, where he worked as a Quarter-Master.

As soon as war broke out, these ‘civilians’, Otto among them,  put on their uniforms. Otto  was given the rank of Oberst (Colonel). 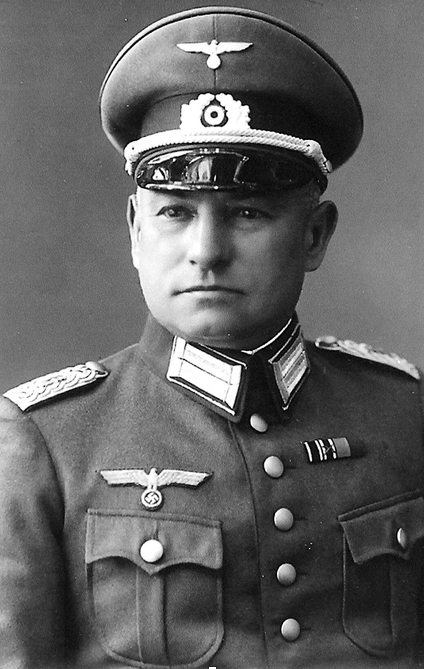 Otto Marries for the Second Time

After his first wife, Magdalena, died, Otto placed an advertisement in his local newspaper asking to meet a woman with a view to marriage.

Among those who replied was Mia Koschorrek, a 27-year-old farmer’s daughter, of Polish descent.

A few years earlier, both her parents had suffered brutal deaths. In the Autumn of 1914, a group of marauding Cossacks had attacked their small farm and bayoneted both through the eyes. They were two of many victims claimed by the Red Army as they roamed the Polish countryside slaughtering numerous farmers in the same barbaric manner.

Within months she and 44-year-old Otto were married. They had two children, a daughter Roswitha and a son Siegfried. 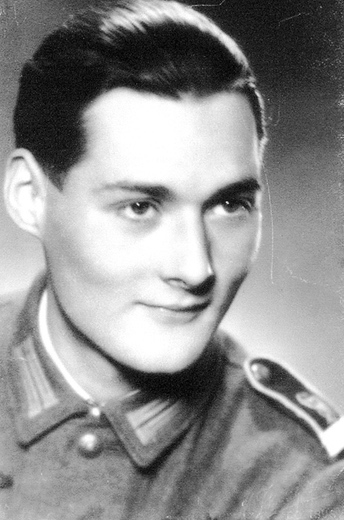 Siegfried aged 17, shortly after he joined the Panzers

As a teenager Siegfried, in common with all German youngsters during the ‘thirties, had joined the Hitler Youth.

In early 1945, as Germany hurtled towards defeat, the Nazis sent every available man on a futile quest to delay the inevitable. Although he was still only seventeen, Siegfried was conscripted into the Panzers (the tank corps)

Like many young men, he found life in the army a combination of tedium and excitement as can be seen from his letters home. The first of these was sent on 30 January, 1945,

At last I have a chance to write to you. A good deal has happened since I was last in touch, as you will already gather from my new address.

I received your letter yesterday. It was forwarded to me because I left Cottbus a week ago. I had no choice. I am now waiting for my next posting. I still have a suitcase with my things here. I will leave it with a local family, when I get posted, and ask them to send it to Langensalza, (Bad Langensalza is a spa town of 17,500 inhabitants in the district of Unstrut-Hainich, Thuringia) when the postal service is suspension has been lifted. I do not want to send the case to Stettin. Otherwise I am well. You don’t have to worry. Should something happen, I will write to you at once.  Fondest greetings to you all.  From your Siegfried.” 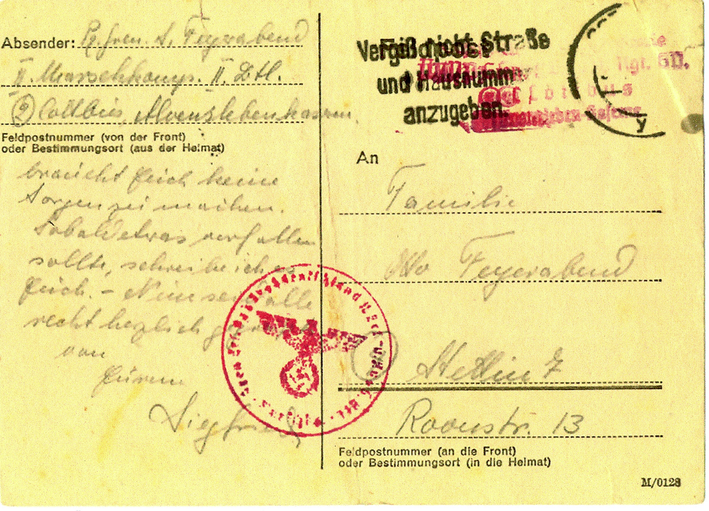 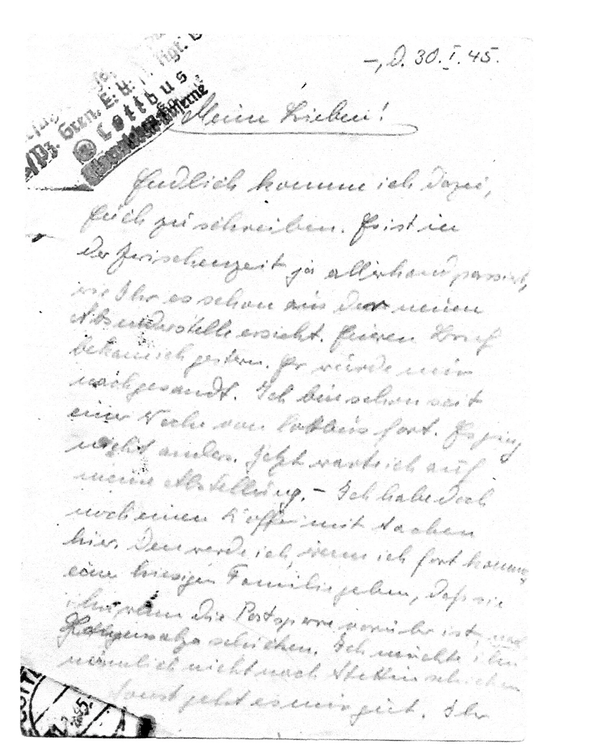 Siegfried’s message is continued on the address side of the card above.

A Young Soldier Eager for War

As with many inexperienced, young, soldiers, Siegfried was only too eager to see action ‘at the front’. Feelings he made clear in his next letter home dated February 5.

During a short break I want to send you a few quick greetings. We are firmly installed here. We all have been kitted out with battledress and are still waiting for our posting, which hopefully will come soon. It is no fun to sit around idly. Health wise I am well. Had to go to the dentist again, to finally have my teeth filled. Do not bother to write to me here, as my address will change very soon. I will let you know of course. Otherwise nothing has changed. Not much to write about. Fond greetings to you all from your Siegfried.” 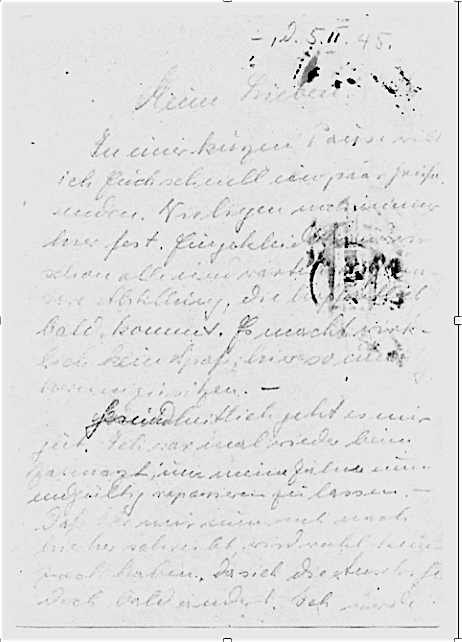 As with all his letters home, Siegfried wrote in pencil which, over time, has become very faint and in some places difficult to decipher, especially the last one he ever sent, shown below. His address is now only a number. Fp stands for feldpost, ie Fieldpost.

On the 25 February he wrote again.

It is about time to let you know my new address, which you will find it overleaf. As for me personally, I am in good shape and presently on home ground. Only four days ago we were confronting Ivan. (Nickname for the Russians.) I hope we can beat him.

A grenade hit about three-quarters of a meter away from my hole. Nothing happened. Only my gear, which I had left outside, is a total loss. Luck is on my side! Now moving towards Ivan again. We shall drive him off, as we did before.  We chased him quite considerably, so he won’t come to you. I have passed you four times but was unable to phone. The last time we drove along the Autobahn I could see our hunting ground once more again. Imagine the feeling I had! Well, something more shortly.  Many fond greetings, your Siegfried.’ 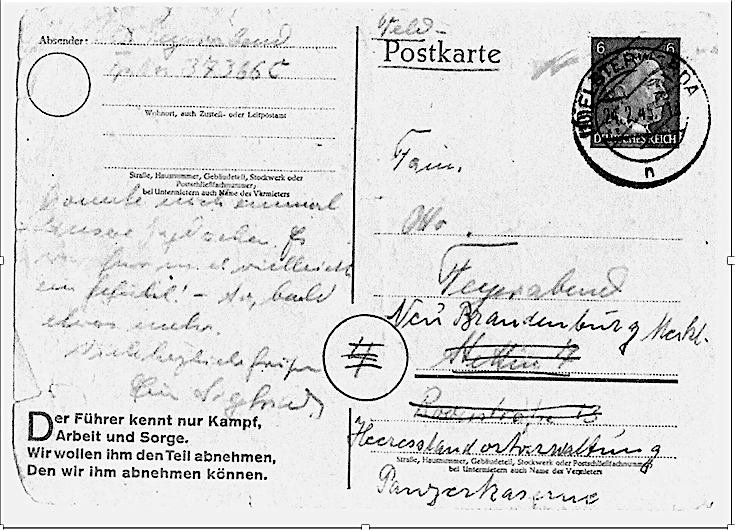 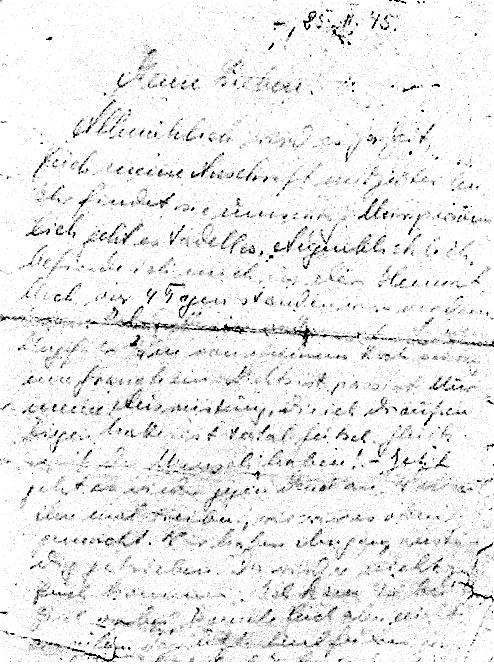 Printed on the postcard above are the words:  ‘The Führer knows only struggle, toil and trouble. We wish to relieve him of that part of it of which we are capable.”

The German word Granate, can mean a grenade, artillery-shell or mortar-bomb. As there was no hand-to-hand fighting, and Siegfried’s ‘foxhole’ was not destroyed, it might have been a light mortar.

‘Siegfried, was so optimistic,’ commented his sister Roswitha, after the war. ‘When he wrote this postcard, the Russians were already attacking on the east side of the river Oder. It was the river that held them up, but not for long. In Stettin we could hear the heavy guns. At that time, we had no idea that Siegfried was fighting in this area. His scant news can only leave one guessing at the full picture.’

On March 3rd, a few weeks before his eighteenth birthday, Siegfried wrote what was to be his last letter home. On the bottom right hand corner, he made a little drawing of their washing arrangements (see below)

At last I have peace and quiet – and time. At last out of the mess. Got through everywhere alright (sic). Luck has to be on one’s side, and I believe it will not leave me.

New proof of it is the fact, that I am presently at the staff headquarters. What fun and games. We drive at night, in the early morning we lay our (telephone?) lines winding them up again in the afternoon. But at least one has time to rest and to wash thoroughly.

We are billeted at a country estate. 3 men in a beautiful room. Last night we heated water in the washing boiler, fetched a bathtub from upstairs and then bathed quite ‘elegantly’. It was wonderful. Even with shower!

The dream will soon come to an end. It will mean advancing. Our unit has chased Ivan again, and we have to follow soon. Who knows where we will be accommodated next. Perhaps even better?

The food here is more than good. I have never eaten so much as I eat here. First and second breakfast, midday dinner, coffee break (in the afternoon) and supper, following each other in plentiful variety. What more can one wish for?

Now, how are you? Is all well? I hope the Tommy has left you in peace. –

Outside is real spring weather. It is still cold but the sun shines so brightly and from inside our warm room it looks beautiful. Yesterday was still such a storm, that one could hardly keep standing up.

So, until next time.    Fondest greetings to all.   Your Siegfried. 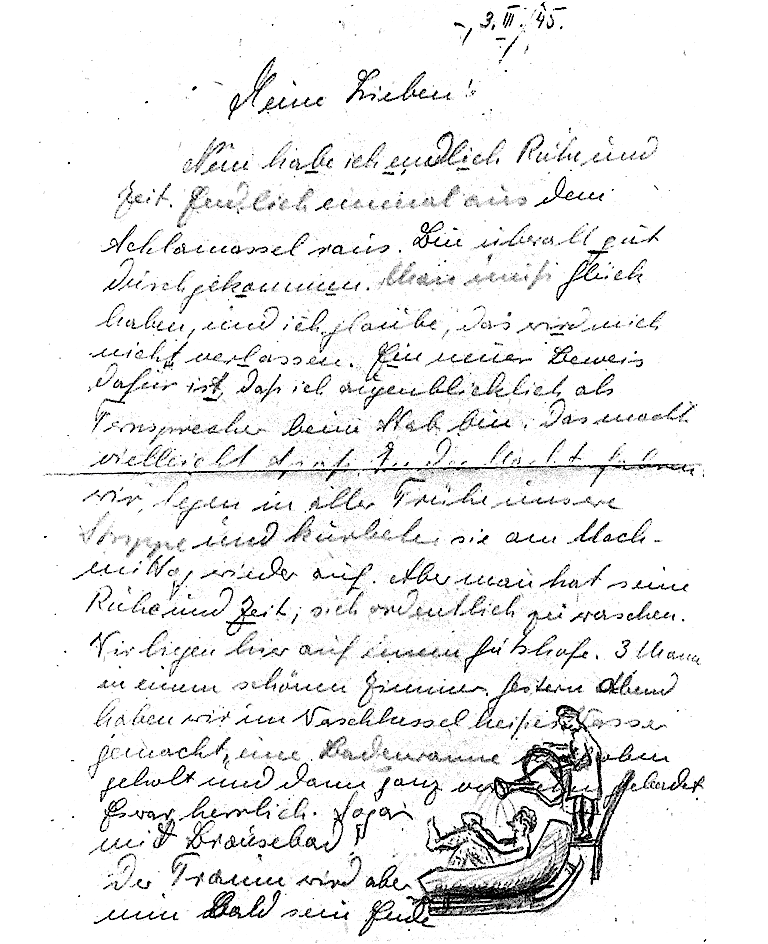 Letter from Siegfried Feyerabend dated 3 March 1945. This was written about a fortnight after his father, Otto, had been threatened with the guillotine following the air attacks on Dresden.

‘I remember being cheered by the light-hearted tone of Siegfried’s letter and the amusing sketch,’ Roswitha recalled. ‘He underlined letters to make up a simple code, telling us the name of the place where he was stationed. It reads: bei gorlitz,’ (Görlitz is a town in Eastern Germany not far from the Polish frontier).

The Destruction of Dresden

To prevent German troops being drawn from Norway, Italy and Holland to defend the Breslau area against the Russian Red Army’s invasion, the railway marshalling yards at Dresden were attacked by air on 13 February 1945.

The British sent two waves of bombers, the first being 245 in number, and during this one-hour attack, a firestorm started, burning through eleven square miles of the ancient and beautiful city.

The inferno was intensified, three and a half hours later, by a second wave of 529.  The following morning, the US Air Force sent 450 bombers to complete the job. They also dropped 642 tons of bombs on Chemnitz and 752 on Magdeburg. During the operation the Allies lost only eight aircraft

The following day, 15 February, the US Air Force returned to Dresden with 200 bombers to cause more havoc by killing the fire fighters and rescue-personnel. 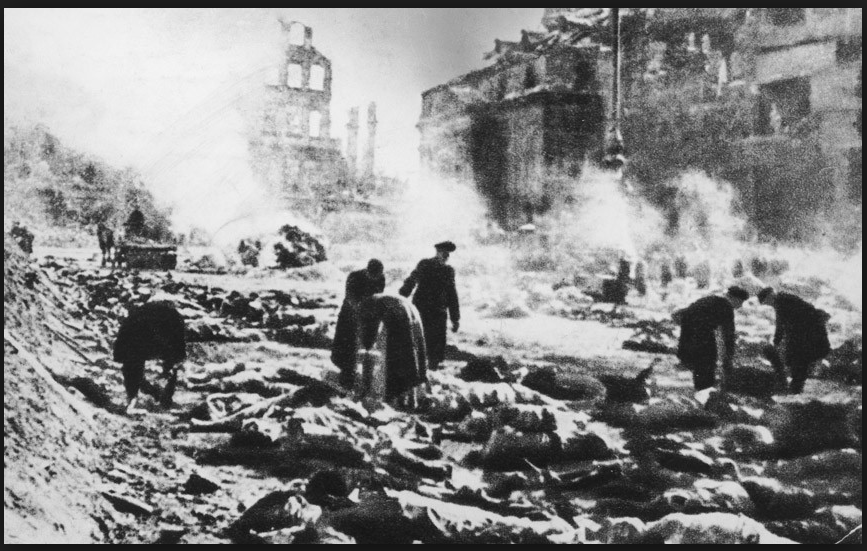 The fires burnt for a week. The figure for officially identified dead, most burnt to death, was 39,773. At least 20,000 bodies were buried beneath the ruins or incinerated beyond recognition.

Otto is Threatened with Execution

When the bombing finally ceased, a Nazi official telephoned Otto ordering him to provide thousands of beds immediately to accommodate the refugees. When he informed the man this was not possible, those many spare beds simply did not exist, the official became hysterical. Screaming in fury he told Otto to obey his order immediately, or faced execution by beheading. The threat was never carried out.

During this period of the war, with their ‘thousand-year Reich’ collapsing in flames around them, Nazis frequently threatened each other with execution and, not infrequently, carried out their threat.

The Death of Siegfried

On the 21 September, 1946, Otto received a postcard every family on all sides of the war most dreaded. His son, the grieving parents were informed, had been badly wounded on the Russian Front. 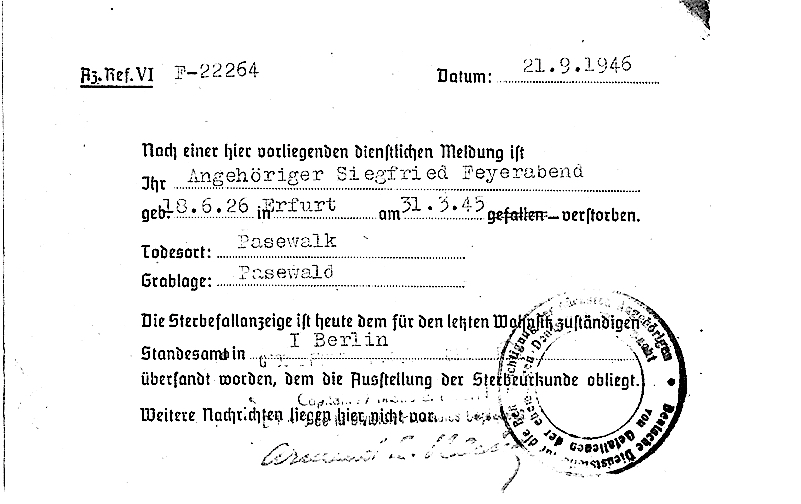 Postcard from the Deutsche Dienststelle (German Service Department), dated 21 September 1946, to Otto Feyerabend confirming the date and place of the death of his son Siegfried.

Repatriated to a military hospital, at Pasewalk in Northern Germany,  he had been operated on and his leg removed. For a while he seemed to be making a good recovery, then infection set in and he died of sepsis on 30th March, 1945 a few days before his eighteenth birthday. His body was buried in Pasewalk cemetery.1

Otto survived the war but died, of stomach-cancer, on 3 April 1959 at Baden-Baden, in the German Federal Republic.

This blog, the correspondence between Siegfried and his family and the photographs were very generously provided to me by former British soldier Philip Howell from his remarkable family archive.

In next week’s Blog I will be describing the work of Britain’s top-secret code and cipher breaking department, OB40. The First War’s equivalent of the WW2 centre, Bletchley Park. OB40 is credited with considerably shortening the conflict by revealing Germany’s most secret communications.